I received the following email from Frank Merklein:

Dan, I was a cameraman at NBC NY beginnin Feb 1948.I would like to send you a photo taken of Paul Winchell,Jerry and myself during a break in live show.
Frank

Here was my response:

Frank,
Please send me pictures and of course any story you would like to write which I can share with all that visit Ventriloquist Central. It would be greatly appreciated.
Dan

To my delight this was Frank’s response: 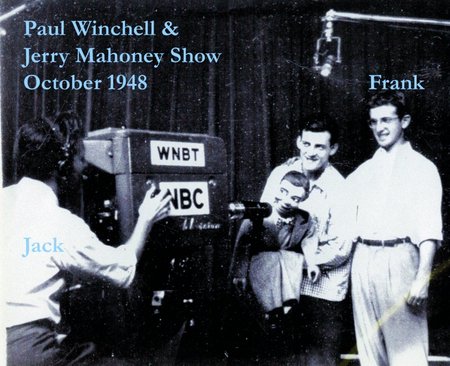 Dan,
This is the single photo I have of the show,It came from Studio G which was especially built for Toscanini.I was assigned to his program as well. Paul was a pleasure to work with over the few seasons he was on NBC. We moved to Studio 3B for his solo show after they dropped Dunninger. Paul embraced the audience and even integrated the crew into his routines. He was a year older than me.

We even addressed Jerry Mahoney in giving directions “Look left”,”Move your leg”,etc..I did the Howdy Doody program as well …talked to Howdy and even Shari Lewis with Lamb Chop (actually a sock over her hand)..Well it was better than talking to one’s self… Besides on the Winchell show we earned $48 weekly….Not bad after 4 years of war,then finishing school on $20 wk for over a year.

It is sad that we never communicated after Paul went west.I never did send him the photo and cannot recall if Jack made a copy for him at the time. Thanks for letting me reminisce.

PS..As a 14 year old I even tried my hand as a ventriloquist. My father worked in Fox Theaters.He brought home a Charlie McCarthy a full size promo piece ,for me.The interest faded,once the hormones kicked in.
Did you ever wonder how a ventriloquist could become a hit on radio?.

Frank, thanks so much for sharing this wonderful story with us at Ventriloquist Central.