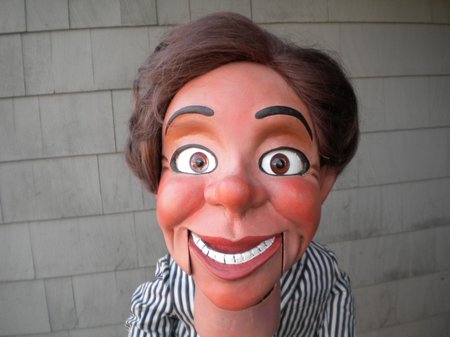 After talking with Bill Nelson and showing him the pictures of this figure Bill was able to confirm to me that this particular figure is quite possibly his number one figure.

Bill went through his photo archive and found a picture of him in his workshop in Richmond Virginia where he is in the process of sculpting heads. The figure you see here is pictured in the sculpting stage in the fore ground of this picture.

Bill sculpted in clay and then the heads were cast in fiberglass. No molds of these figures were made so they are one of a kind. Bill had someone in Richmond do the jaw mechanics and that was the only function in the very first figures.

The figures were cast in fiberglass and were signed on the back of the neck. These early figures were also flat bottom on the neck and used drop through bodies. The paint Bill used back then was oils. This figure according to Bill dates from late 1970 to early 1980 but he could not pin down the exact date. Close enough for me.

In the background on the shelf and also scattered you will see the static dolls which I mentioned in a previous blog. Most notably is Mr Horowitz as a static doll. 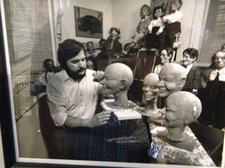 Bill confirmed with me that he believes this to be the first of a trio of faces he made and was excited to see it was in the Ventriloquist Central Collection.