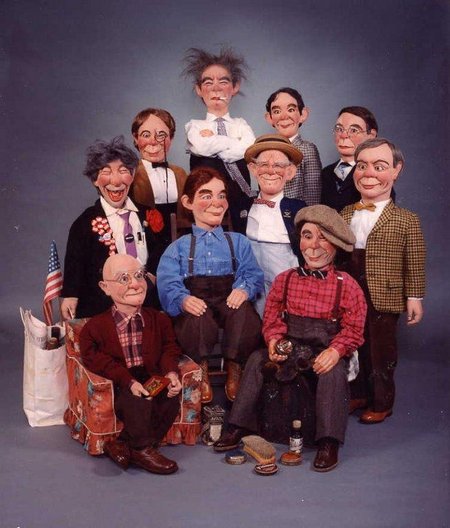 Of course everyone in the ventriloquist world knows who Bill Nelson is because over the past 30 years he has produced some astounding ventriloquist figures.

Probably the most famous of his ventriloquist figures is Mr. Horowitz which was done in collaboration with Chuck Jackson. He also produced a few other characters as well with Mr. Jackson. Those were wood carved figures.

I was chatting with Bill and found out that long before his making ventriloquist figures he made dolls. One of his more famous clients was Demi Moore. Bill did doll shows all over the US and his dolls are highly collectible and are very hard to find today.

What amazed me most was to find out that Bill sold 42″ tall static dolls, no moving parts, and one of his dolls was Mr. Horowitz. He told me he sold this static doll long before he ever made any ventriloquist figures.

I have attached a wonderful picture of Bill’s static dolls for you to see. If you find one you have found a treasure.