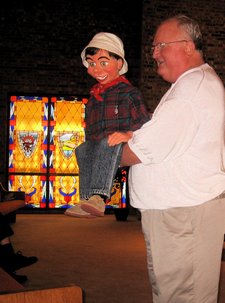 With the current release of David Erskine’s new book, “The Great Lester: Ventriloquism’s Renaissance Man”, I thought it only fitting to reprint this blog from exactly five years ago today.

David sent us this information and I thought it was a good time to re-share it with everyone:

Last week David Erskine and Ronny Darnay talked about the Good News with children at a Vacation Bible School in Fort Worth, TX. Ronny observed that the material never changes but Erskine does. One question he asked was: “Erskine, when you were my age, did you have hair?” Jeff Dunham crafted this Ronny Darnay head in 1984 as a copy of his famous McElroy figure, Ollie. Erskine painted it and made the body and hands. Later Ray Guyll repainted it. Ronny’s story is included in Greg Claassen’s singular book McElroy Magic! Building a Replica.

David Erskine and Ronny Darnay have been together since 1955, junior high school. That year Paul Winchell offered his book Ventriloquism for Fun and Profit on his Saturday morning children’s TV show, Winchell and Mahoney Show. Erskine saved money for bus fare and the purchase of the book, rode the bus downtown to Barber’s Book Store, bought the book and read it “before he returned home” and has been doing it ever since. Winchell included information about W.S. Berger and his Vent Haven in Fort Mitchell, KY, and the International Brotherhood of Ventriloquists. Mr. Berger published a magazine, The Oracle, which featured vents from around the world. Receiving the heavy paper, typeset magazine was a special event because there were no vent conventions. The Ed Sullivan Show and other TV variety shows featured the greatest vents.

Erskine wrote Mr. Berger asking about membership in the I.B.V. and in his college years began a friendship that included overnight visits with Mr. Berger and his wife, Muzz. There Erskine saw McElroy figures and was fascinated by them. Mr. Berger was happy to tell him George and Glenn McElroy stories.

Erskine created several versions of Ronny Darnay. The first was papier-mâché and one was purchased … Frank Marshall wasn’t answering Mr. Berger’s letters and he didn’t answer Erskine’s. Neither did George McElroy.

Several years after Mr. Berger died, a newly formed Vent Haven advisory board sent letters announcing a convention to people on Mr. Berger’s mailing list. The list of special guests included George and Glenn McElroy — there was the reason for Erskine to attend. When George saw Erskine’s name tag he said with a smile, “I’m going to answer your letter!” During the years other lasting friendships developed. Visiting people like George and Glenn was always a special time.

In the middle ’80s, Erskine self-published books of interviews with vents and annually had a dealer’s table where he sold them and also offered for sale vent collectibles.

Soon Erskine will offer the remaining interview books here. Also, other self-published vent works will be offered. Ronny says, “He has to find them first.”