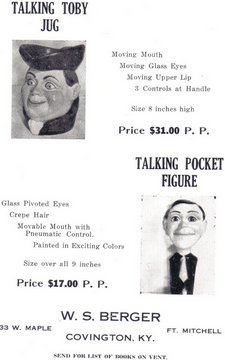 My Idol in ventriloquism is W.S. Berger. I give him credit for having the fore sight to see the value of ventriloquist figures before they were a collectible item in any sense of the word collectible. They were used props which to anyone other than he were valueless.

He was able to purchase figures directly from the great makers of the early 20th century for the asking prices they sold to any one else that was buying a figure. He purchased Jacko from the McElroy Brothers for $125.00 and was able to actually make monthly payments to them for the purchase. How great was that??

But he was a business man too and not only did he buy but he also sold. In the issues of the Oracle magazine in the 1950’s he often put in adds with a list of books and figures for sale. He also made a deal with Len Insull to sell figures from his workshop.

Above is an original ad that W.S. Berger put out offering Len Insull Toby Jugs and Pocket Figures for sale. Even though he offered these items for sale it seems that not many were sold because Len Insull only made 50 Toby Jugs and only 16 pocket figures. How many could he have sold??

Here are some videos of the Toby Jug and the Pocket Figures.