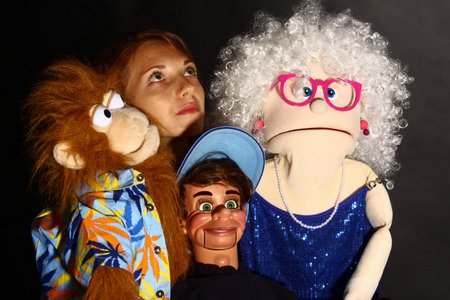 My partner Steve has been in correspondence with a ventriloquist in Romania who’s name is Crina Zvoboda. Since according to Crina, ventriloquists are very rare in Romania, Steve asked Crina to send us her story with along with some photos, so here it is:

Until two years ago being a ventriloquist in Romania was a very uncommon concept. Only a few people knew what that actually was.

I studied theatrics and puppets at UNATC University of Bucharest
After finishing school here I decided to pursuit my master in puppets rather than acting.

My first year was very difficult there because my plan was to establish the first adult puppet theater in Romania. I took steps to form a small group of people working in this sense. I was leading this team and was putting a lot of effort into it and found I was disappointed with my colleagues who didn’t support the project enough to make it work in good time.

I started thinking that it would never have worked no matter what I tried, so I gave up. I was ready to drop out of school too, I gave up the shows I still had at the time, got a job as a babysitter and took a break for 3 months. Shortly after that I came to my senses and started wanting to resume my path as an artist. I was leaning a lot online from the videos I found on Youtube about ventriloquists such as, Jeff Dunham, Nina Conti, Terry Fator etc. I found an interesting book named “All by my selves” wrote by Jeff Dunham. After reading the book I bought my first puppet (Old ma’ Juliet) and started exercising in front of the mirror. I had to spend a lot of time working as a babysitter to make sure my bills are paid on time and so the very few hours that remained I was spending practicing over and over again with the puppet I had. 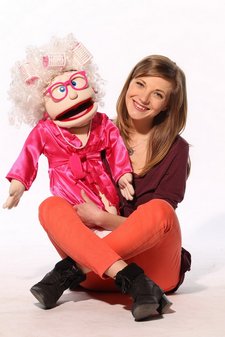 To my surprise the kid’s parents thought what I was trying to accomplish was very noble, they supported me and for my birthday they ordered a professional puppet from the US, the kind that was so expensive I couldn’t afford to get by myself( I named him Romeo).

That was a very special day for me. I got off work and left with the puppet on and I was looking for some sort of feedback from the people who saw us as we were going home. I got on a bus in my direction and I could immediately see the peoples faces turning towards us. Some of them stopped and asked what the puppet was and what I’m doing with it. So right then and there I decided to show them who we are and put on a show for a short minute or so, my first ventriloquist show. They loved it and they all said goodbye at the same time and wished me the best as I reached my destination and got off.

That was the day I decided what I was going to do with my life.
So every day I woke up, got everything ready, took Romeo for a ride with the bus, interacted with the people just for practice and took notes of the things I needed to improve in my act.

The people in general were very supportive and warm so they motivated me to keep at it. I started working on a text mainly for kids and I made it 40 minutes long, I managed to schedule 2 shows only, some of the people managing events just wouldn’t understand what I was about so many refused me even though I made it clear I was charging no fees at all. So I did what I could in that situation. One of the shows I did was for a kid’s shelter, the other one for a hospital taking care of kids with cancer. 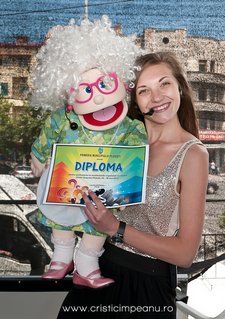 To make sure I keep the shows going I was calling every school and accepting very small fees for the shows. Slowly but surely I was making progress. I was shooting video of me doing the shows and reviewing every interaction and the good and bad reactions to my jokes.

Five months later I did my first adult puppet show that lasted no less then one hour. The people were very responsive and were with me all the way, laughed at every single joke I made.

I also tried pubs and clubs in Bucharest but they had a different view of things , didn’t seem to agree that it actually works and the people like it ! I had no luck there, the industry it seems, was not fully prepared for me yet.

Probably the best idea I had was to take my show with me on stage on TV for “Romania’s Got Talent”. I wasn’t sure I could win first prize but I was sure that I would benefit from making the art itself better known and maybe get some more work out of this.

Since then my phone started ringing a lot and now I finally have enough work to make a living out of it.

I am confident in myself and I dream of doing bigger shows in the future so at this point I’m reaching out for professional advice abroad.

Crina, thanks for sharing your story with us and continued success on your journey with ventriloquism.