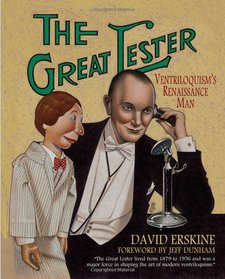 For those of you who may not know David, he is a retired thru-freight conductor for the Union Pacific Railroad Co., is recognized as being an eclectic ventriloquial performer, historian, collector, author, and coach—as well as being a student of creativity and comedy. He has been on the entertainment scene since 1955 and has contributed stories to magazines, books, and websites.

He has self-published histories of ventriloquists and ventriloquism. Additionally, in 2009 he wrote Margaret’s Music Is Her Life Story as told to David Erskine. Margaret Kiwiet lived through one of the most horrifying times in modern history, but her story is filled with love and joy throughout. The book is available at LuLu.com. and Amazon.com. He is currently developing a CD, The Collector’s Voice by David Erskine—a digital look at the folk art of collecting in the ventriloquists’ world. He and his wife, Marie, a retired director of critical care nursing, live in Fort Worth, Texas.

David Erskine gains great joy by “putting people on with a puppet.” At a young age it seemed like a natural thing for him to do. Still it is always a special experience when his ventriloquial figure, Ronny Darnay, comes to life in Erskine’s imagination and his right hand. Ronny resembles a McElroy figure named Ezry that was used by Rudy Vallee.

This figure is now known as Jeff Dunham’s Ollie, a name Erskine suggested to Jeff when he first saw the figure in 1984. At the Arlington Heights High School Reunion, Class of 1960, held October 16, 2010 in Fort Worth, Ronny Darnay was chosen as “The Least-Changed 1960 Graduate.” AHHS is also Erskine’s alma mater. Erskine also graduated from Texas Wesleyan College with a major in speech-drama and a minor in journalism.

Here is a description of “The Great Lester: Ventriloquism’s Renaissance Man:”

In this engrossing “fictional memoir” based on original sources, Harry Eugene Lester paints a rich picture of his life and times as the world’s premiere ventriloquist in the heyday of vaudeville and beyond. Not only will “vents” and historians appreciate this book, but also, as it’s a delight to read, anyone who likes to read personal reflections of a life well lived can enjoy The Great Lester: Ventriloquism’s Renaissance Man.

The Great Lester was a Renaissance man—a free spirit—a creative person who originated a ventriloquist act that both changed and enlightened American ventriloquism, even as he wrestled with the changing times and his own inner world. What makes that character different from the rest of us? What are the secrets of his talent? What is creative vision, and where does it come from? Based on original research, including access to newspaper and magazine accounts and previously unpublished correspondence, and primary source tape recordings made by Lester, The Great Lester: Ventriloquism’s Renaissance Man presents the first fully integrated portrait of this American icon of ventriloquism.

Few performers lived such a large and eventful life while transportation and electricity changed the world. Lester’s early life was one of restless adventure going to new places following traveling entertainment—first with the circus, then Dime Museums, and then American vaudeville and music halls in Europe. He traveled the world, becoming famous and wealthy, and then becoming penniless as the fashions in show business changed. Lester possessed an evangelical zeal to share his approaches regarding acquiring the art and craft of ventriloquism.

His most famous student was Edgar Bergen, fresh from high school in 1922. Lester spent his last years teaching ventriloquism students one on one at his studio in Hollywood. Erskine brings Lester to life as never before. He also details parts of Lester’s personality that cannot be easily understood—his defiance of rules regarding his career and his inability to change with the fashions in show business.

My copy is on it’s way and I can’t wait to read all about The Great Lester!

Click here for more information or to get your copy of “The Great Lester: Ventriloquism’s Renaissance Man: by David Erskine Foreword by Jeff Dunham”