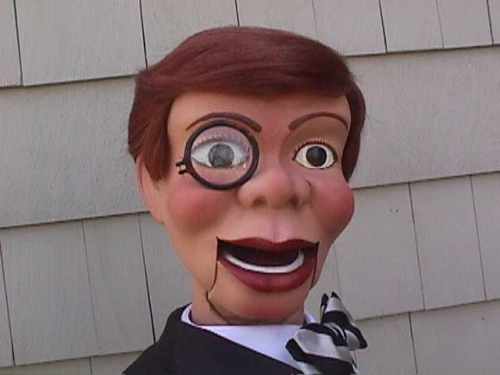 As we all know, at this point in time, when Edgar Bergen decided to purchase his figure from the Mack’s studio he had to choose from an array of heads. From what I have learned he chose a stock head and then had the Mack’s do some customizing to make it the Irish Newsboy he wanted to use.

I have had this particular figure in my collection for almost as long as I have been collecting. After I first purchased him I was in touch with Joe Lopez, a Charlie McCarthy fanatic, and he informed me that this is the head that Mr Bergen chose. Hence my name Pre Charlie Charlie.

When I purchased this figure the head had been painted maybe ten times over and the wig had been replaced with what had become a ratty excuse for hair. I decided it had to be redone and the end result I have liked for ever. It is Charlie McCarthy from another dimension. LOL All kidding aside if you look at him you can see that with his nose and cheeks thinned a bit Charlie McCarthy is there.

This is a full size Mack figure standing 40″ tall the head stick goes to the bottom board and attached with the original threaded screw into the bottom of the head stick. This gives him a sweet 360 degree rotation which is flawless. He also has one eye which is a rolling winker and of course slot jaw. He dates back to approximately 1920.

I have kept him out of view from the public for quite some time but decided to show him off. I hope you enjoy seeing him.