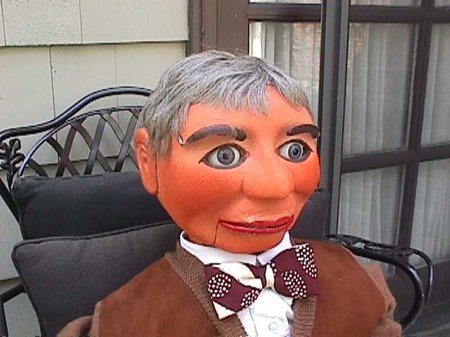 I was quite surprised to see the Frank Byron Jr figure listed for sale on eBay. They are a rare figure for sure but the seller unfortunately is wrong about his facts. I actually wrote in to him and my email, which he posted at the bottom starts with FYI.

The Original Frank Byron Jr figure resides at the Vent Haven Museum. This figures duplicarver head was acquired by Frank Marshall with his acquisition of the Mack Shop.

The dead give away for me that the figure listed was not made by Mack was the hands. I have 2 Frank Marshall figures with those flat style hands with the fingers separated. Also the wedge cut under the chin. If it were made by Mack it would most certainly have had the leather under the chin.

The paint of this figure looks like it was done with a roller and although he states his parents touched it up it has clearly been repainted and as I have stated numerous times in the past a collector will never pay the high money for a figure that has been redone.

The eye is a rolling winker on this figure and clearly it needs some work.

All in all it is a nice example of the Byron figures which Frank Marshall produced but I think the value of the figure is somewhere around his starting price ,and that is all, in it’s present condition.

These are my thoughts on this interesting ventriloquist figure!!