Bob Abdou Will Perform at the Ventriloquist Central Birthday Bash 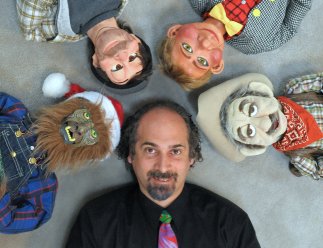 My good friend ventriloquist and Mr. Puppet, Bob Abdou will be performing at the Ventriloquist Central Birthday Bash.

At an early age, Bob has been fascinated with performing with puppets. Bob’s first experience of performing was when he watched a movie with Dick Van Dyke called “The Comic”. Now bitten by the stage bug, Bob wanted to perform when he received his first ventriloquist dummy of Jerry Mahoney from his Aunt Joann & Uncle Jack. From there television played a major role in becoming a better entertainer by watching the Uncle Floyd show in Fairlawn New Jersey and later meeting his role model Floyd Vivino years later.

A move to Atlanta, Georgia exposed Bob to professional clean comedians like Jeff Justice. A path is now paved for Bob to go professional in 1996. Averaging 400 shows a year has given Bob the experience and know – how on what works for a show to be successful. In 2003 Bob was able to become an international entertainer by traveling overseas to Tokyo, Japan and Oahu, Hawaii.

Bob Abdou continues to perform for the young at hearts with clean comedy, audience participation and tons of laughs.