Scott Bryte and His Jester

Posted on September 4, 2011 by Webmaster 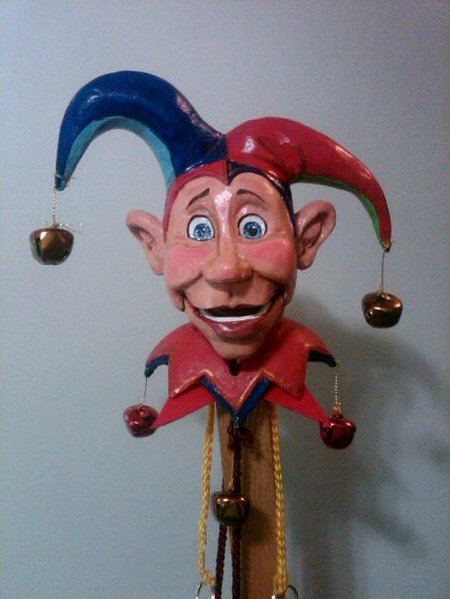 Well our good buddy Pastor Scott Bryte has done it again. His “out of the box” thinking gives him inspiration to create wonderfully unique items such as this “Jester”. And, you could own this little guy!!!

Back in the day when kings were kings and their word was law, everyone was careful not to say anything that would put them in the king’s bad graces.

Other royalty, the kings advisers, even the queen, had to watch their words carefully. There was one exception to this, and one exception only. The king’s personal comedian, the court jester, enjoyed a freedom that no one else had. As long as it was couched in humor, the jester alone could comment strongly and even sharply on any and every aspect of the king’s reign. Even the trappings of royal authority were open to satire in the jester’s hands. The wild and bell-decked jester’s hat was an open mockery of the crown. And often, the jester often had a scepter of his own, a parody of the king’s most prized emblem of power. The jester’s scepter was called a ‘marotte’ and featured a carved head on the top, usually in the jester’s own likeness and wearing a miniature copy of the jester’s hat.

This is a ventriloquist’s marotte. It’s head, hat and collar are carved from basswood, and painted with an antique finish. It is mounted on an oak post. It is equipped with a moving mouth, which has a very gentle and “clackless” return. Overall length is 34″. The head, measure from the point of the collar tot he top of the hat is c. 8″ high. This is a true must have item for any vent who works at renaissance festivals or anyone who want something outside of the box!!