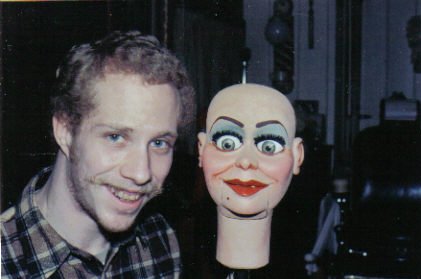 When I first received the picture of Brian Hamilton holding the female figures head (click here) I wondered where this particular figure had gone. I made some inquiries and found out that this figure was originally made for ventriloquist Ken Karter to use as a floozy type character. When it was completed Ken passed on it for what ever the reason may have been.

Brian was a fellow who lived day to day and was always in need of money so when this figure did not sell he called his friend Bob Isaacson who came to his rescue and purchased the figure.

Bob in turn sold her to another performer/collector who would like to remain anonymous. The figures rested with him for the better part of 20 years. I of course contacted this person and was told it was not for sale but maybe some time down the road it would be and I told him to just let me know.

Over a year passed and suddenly I was doing a deal for something else with this collector and he decided he would let the Hamilton go and she passed to my collection. I have had her for a while and had to have her all around eye movement repaired as they did not work when I received her.

I completed this task myself and they now work perfectly in all directions. I first wigged her in a blond wig but the original idea of a floozy character didn’t seem to work with blond hair so then a red wig came into play. I think you will agree it works much better.

She is dressed in her slinky red dress with red feather boa fishnet stockings and black patent leather shoes to complete the look. Oh yes red fingernails were a must.

She has the McElroy body, hands, harness and her functions are all around weighted eye movement, winkers/blinkers and of course slot jaw. The paint on her is all original from Brian Hamilton and she is cast in fiberglass. She is just a wonderful creation and I am happy she is here in my collection.