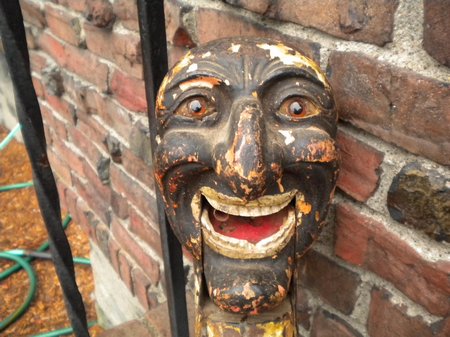 We all know that Frank Marshall was a master carver and when you look at this ventriloquist figure you will really see how skilled he really was with a carving chisel.

I was contacted by a fellow named Ron Teska and he told me that he had a Frank Marshall which was named Lucky Charlie and said he wanted to make sure he went to the right place. I assured him that if Lucky Charlie came to Ventriloquist Central Collection if you certainly have a good home here with all the other Frank Marshall figures in the collection. Well we talked and he is now here.

Lucky Charlie may be one of the rarest of the heads done by Marshall because it is the face of the Punch puppet from Punch and Judy fame. I contacted my mentor Bob Isaacson and he said in all his time spent at Frank’s shop and through all his life he only saw one rendition of a full size Punch Figure and said that this one just might be that one although this we can’t confirm. Mr Teska owned him for just over 40 years.

As you can see he has been repainted eons ago to be in blackface but he was originally white. He is missing his leather under the chin too. All of his functions are working and they are slot jaw, each eye winks by rolling down and can be done together, he also has a smoker and a spitter which are also both in working condition.

I am picturing him as he arrived to me but I am going to do the much warranted restoration on him. He certainly deserves some. When he is finished I will post the completed pictures too.