We were contacted by Justine, who was researching an article he was doing and wanted to know if we have more information about ventriloquist Frank Travis who is listed on the Tribute to Ventriloquism, “Ventriloquist Entertainers 18th and 19th Century.”

I told Justine that was all the information we had on Frank Travis. He proceeded to send us information and pictures that he had uncovered so that we might share them with everyone here at Ventriloquist Central.

Hello Dan! I have got enough information now to supplement the reference to Travis, listed in your ‘Ventriloquist entertainers 18th and 19th century.

The photos I’ve attached, one of the photos is pretty grainy, I can date that 1 at 1884, and have had it restored as it was completely damaged, which is why one of the figures has no head! 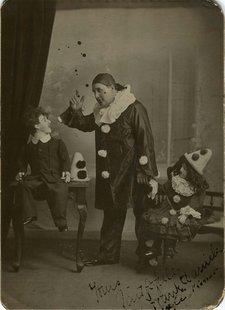 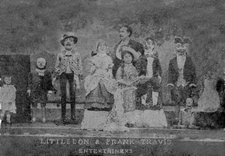 What I have is

Born Francis Thackeray and gained fame in 1879 after a successful tour of the continent. He employed 7 ventriloquial figures which he would seat around a table singing and conversing which each in turn. It was claimed on his behalf that he was the originator of the feats of smoking and drinking while ventriloquising. Appeared on stage in a military uniform and was a huge favorite in Australia.

Justine thanks so much for sharing this information and photos with us. We have since updated the “Ventriloquist Entertainers 18th and 19th Century” web page with this information.