Arthur Quisto lived from 1882 to 1960. His real name was Edwin Simms. He was known primarily for his Punch & Judy Shows, but Quisto also built figures for Tom Coram and Arthur Prince.

He used pneumatic devices and was the first to use electromagnetic devices to animate his figures.

I was contacted via email by Nick Hawkins from the UK for information about an advertising automaton. Since I had no such information about this, Nick was kind enough to send the following email along with pictures:

Thanks for your reply. Here are photos of the publicity automaton with Quisto’s name, which appears once inside the body panel and once in the wooden base. It’s part of a collection at a German auction (www.breker.com) on November 20, and was once owned by Jack Donovan, a well-known English collector who had a shop in the Portobello Road. 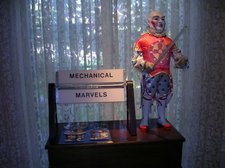 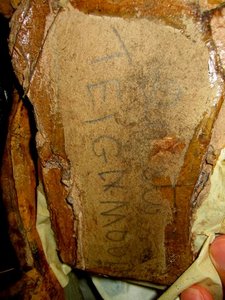 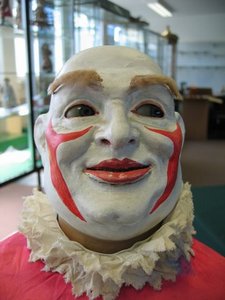 Before that he owned a hotel on the South Coast – I’m not sure where, but possibly it was also Teignmouth. He was collecting from the 1960s – 90s. t would be interesting (and probably now impossible) to find out whether he bought this automaton directly from Quisto and whether Quisto used it for advertising his shows.

Nick thanks for sharing this information with us here at Ventriloquist Central.

I do have an all original Quisto figure in the Ventriloquist Central Collection.

1 Response to The Talents of Ventriloquist Figure Maker Arthur Quisto