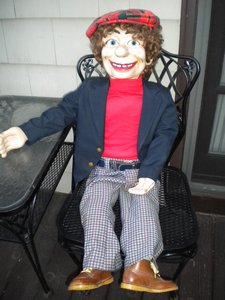 I am a lover of Ken Spencer’s figures because they show so much character. Now I am not talking realism I mean character as in cartoon.

If you look at the figures offered by Ken Spencer in his little brochure this guy was called Oley. In the picture of his head he is shown with curly hair and wearing a cap. 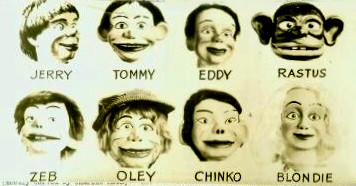 Oley directly from that picture is now a member of the Ventriloquist Central Collection. Oley was sitting on a shelf in a Magic store just waiting for someone to pick him up. I was alerted to him and became the lucky one to get him.

Oley stands 42″ tall and has a rather large carved basswood head. He has side to side weighted moving eyes, raising eyebrows and his right eye winks. Of course he has slot jaw. His wig, plaid cap and paint are all original and have never been touched. Just they way I like to find ventriloquist figures. You will also notice the very prominent proboscis which is not typical of Ken Spencer. Ken usually had his figures with a pointed turned up nose. His body is Spencer’s typical wood framing and wood covered style and the hands are his bulbous shape. The original arms and legs are stuffed muslin.

The clothing, except for his shoes, which are from the 1930’s or 40’s, appear to be from the 1970’s but I would guess this guy was crafted in the 1940’s. This is just an exceptional example of Mr Spencer’s great carving talent.