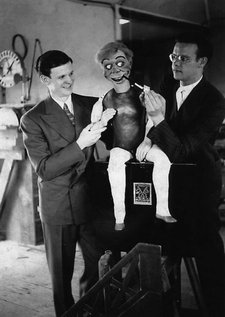 Back in August of 2007, we did a blog featuring a story from Janice McElroy about George and Glenn McElroy. At that time she had posted this story on the McElroy group and gave us permission to use it on the Ventriloquist Central blog.

Since we are constantly getting new readers to the blog, I thought it would be a good idea to share this with everyone.

From the McElroy home front….

Since Glenn and Betty were childless, George’s children make up the
remaining McElroy family. George has a son and daughter, 2 grandsons
and 2 granddaughters, 4 great-grandsons and 3 great-granddaughters.

We are all enormously proud of Glenn and George’s achievements and in
awe of their genius. However, we never wrote a book in tribute,
probably because it didn’t occur to us, and except for a picture now
and then, we have not been posting pictures to the internet.
However, we’re glad to share any pictures we have and delight in
seeing yours.

I thought you might be interested in a conversation I overheard the
other day. It was an overcast, but warm day and I was just lolling
around the pool with my head in the clouds when I heard:

“Hey, Glenn, did you hear Claassen’s written a book about us?”
“Yeah, George, I sure did. In fact, I received an advance copy a
couple of days ago. It was sent air mail. Did you get one too?”
“Yes, I did, but I haven’t had a chance to read it. Not even sure if
I will since I already know how it’s going to end!! I’ve been rather
busy lately. Mary wanted me to build a fireplace, because, although
the weather is near perfect, nights can at times become chilly. It’s
not nearly as hot up here as – – – – well, you know. At any rate,
building material is scarce up here and what I’ve found seems to be
all fluff and a bit too flimsy for my taste. I did, however, find a
Stairway to Heaven that was not being used, so I recycled the
material and built the fireplace. I even put an inlay above it that’s
sprinkled with angel dust that says “In God We Trust”.”

“George, I don’t think it’s politically correct to say that anymore”.
“What?! I’ll say what I damn well want and as God is my Witness, you
can believe me when I say I wasn’t being political. Since when can’t
you say In God we Trust? Humph, that’s ridiculous! So what’s kept you
from reading Claassen’s book?”

“Well, you know, Betty’s here with me now and I had to find a bigger
cloud. We’re in a pretty impressive area now. Bergen is 4 clouds
down, Winchell is a cloud behind me, Shari Lewis is a cloud across
from Bergen and I even saw W.S. Berger floating around.”
“Wow, that’s quite a neighborhood. What’s up with them?”

“Edgar was just saying the other day that he is constantly amazed
with the new materials being used to construct the puppets. He can’t
believe how lightweight they are now. Back in his day, the dummies
were all wood. He said he’s been hearing a lot about a new kid,
Jeff, and says he’s doing a pretty admirable job. That’s a huge
compliment coming from Bergen, don’t you think? I hardly ever see
Paul. He’s always tinkering around with one thing or another and he
gets so wrapped up in his projects, he doesn’t take time to visit. I
swear, he’ll probably re-invent the wheel someday. If he does, I
hope he remembers to get a patent.”

“Glenn, remember a few days ago when we were treating ourselves to
delicious divinity candy?”
“Yes.”
“Well, did you notice the angel sitting on the cloud over your left
wing? I couldn’t take my eyes off her. She had such an innocent look
and she also had one of those big dimples right in the center of her
chin. I hear my kids and grandkids call that a butt chin!! I think
I’ll use her as the model for the next face I create. That would
probably be about the 101st or would it be the 102nd face I’ve
created, I can’t remember, but then, who’s counting?”

“Was that the girl who was playing that oversized harp?”
“Yes.”
“I did see her, but it was the harp that caught my eye. I was just
imagining what I could do with those harp strings.”
“I wanna talk some more about Greg’s book. I hear it’s very good,
but I also hear there’s a lot of talk about it on the internet.
Glenn, I’ve been out of the loop for awhile, what the hell’s an
internet? Is there a use for those harp strings with an internet?”

“To tell the truth, George, I don’t know what it is either. Remember,
I’ve been out of touch a bit longer than you, so you should have a
better idea than me what it is.”
“I know nothing. Just give me a good book to read.”
“I think you’ve got one, George. Remember? Greg’s book?”
“Oh yeah, that. Maybe I will read it after all.”
“You know, I’ve been thinking, George. We really did do some great
work, don’t you think??