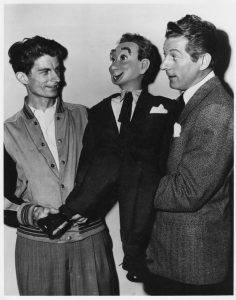 One of the ventriloquist builders of the early 1950’s was Glen Cargyle. He lived in So. California and produced some very interesting ventriloquist figures. Although is add states wooden figures they were in fact made from Mannequin heads that he would then cut open and install mechanics. One of the features of his figures was the carved hair on his figures. That is a dead give away that they were mannequin heads.

Glen was chosen as the builder of the ventriloquist figure for the Danny Kaye movie ” Knock ON Wood” and in actuality he did make 2 wooden heads for the movie but the rest which were 7 in number were not wood. Dennis Alwood was kind enough to give me some personal information on Cargyle and told me he was called into Paramount studios because they were getting rid of props and they had 2 vent figures from the movie Knock on Wood. Unfortunately when he got there the figures were latex skin over the heads which had deteriorated beyond repair and were no good. Dennis did not take them.

Glen was a teacher in Ca. also but lost his licence to teach and left Ca. for Hawaii where he went under an assumed name. Unfortunately for him he became a victim of murder and his brother had to travel to claim his body.

Please enjoy the pictures and story I have added for your viewing pleasure of this ventriloquist figure builder.

This entry was posted in Ventriloquist Figure (Dummy) Makers. Bookmark the permalink.