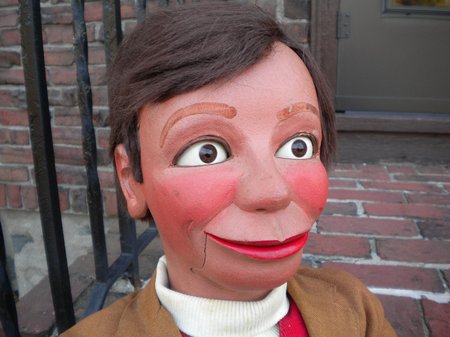 I have always said that magic and ventriloquism are related arts because of the illusion factor. So it is no surprise that magicians will have ventriloquist figures. This figure I am showing today is one such case.

I was contacted by the grand daughter of Frank Radtke “Fakini”, famous for his Fakini Multiplying Billiard Balls, because she had her grandfather’s ventriloquist figure which he had given to her to help her pay for schooling. Although she had the figure she didn’t sell it right away but had put it away. She came across it again and decided it was time. She contacted me and now I am happy to report this wonderful figure is now part of the Ventriloquist Central Collection.

Fakini was a regular attendee at the Abbott’s magic gathering and it was there back in 1970 or so that he purchased this fellow. I do believe that he was actually the second owner of the figure and the original owner’s name was Ray Savidge. I come to this conclusion because inside the case that housed the figure, according to Tiffany, there were letters from Abbott’s to Ray Savidge giving him Jack Coats contact information.

This Coats figure is a full size figure standing 40″ tall, He has slot jaw, side to side self centering eyes, winkers/blinkers and hand shaker. He is 100% original and has never been touched or repaired. Wig and paint and mechanics just as done by Jack Coats. Some of the flock style eyebrow that Jack used is worn off and there are a couple minor paint rubs but he still shows extremely well.

I have to say that Jack Coats really captured the Frank Marshall look with this figure. He looks so Marshallesque to me that it make me shake. LOL