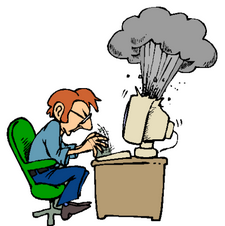 I never would have believed how important computers have become but in the past month I had my expensive HP laptop die. I took it in and was told it was too far gone and would be more expensive to repair than what it was worth.

I was lucky though because I still had my original laptop as a back up. I immediately logged it on but the curse of the computer gods was watching and the hard drive went on it too. Can you believe 2 lap tops dead in two weeks.

Having to make sure I stay on top of blogs for Ventriloquist Central is essential to my everyday living so I proceeded to start using my son’s PC and continued on as if nothing had happened.

Well of course again the gods of computers were watching me and saw I was again on line and they just could not let that happen. They don’t want me to get any more ventriloquist figures for the Ventriloquist Central Collection. Oh yes back on track.

I received an email from a good friend and not giving a second thought opened the mail and there was a link. Guess what… yup virus time. Of course my son’s PC was no longer guarded by his expired antivirus program so I call my Corsican twin brother, Steve Hurst, who helped me download a virus program and after a 1 1/2 hour scan it did capture 2 very high risk viruses.

I deleted them then the program suggested I use their program to reboot the computer and due a start up scan. I did that and here is where the Gods of Computers hit again. After the scan it found that there were 4 files that were corrupt. I called Steve and said do I hit delete? He said yes so I did and hooray all the infected files were gone. Cool….Not.

According to Steve the virus had corrupted most of my programs right down to the windows program. So the computer got packed up and I sent it to my brother Steve who is going to fix the computer and get it running right so that I can return the computer to my son.

As a Constable full time I do a lot of evictions and was telling the owner of the eviction company about my computer problems and today I am writing this on a VERY old computer that he gave me until Steve fixes my son’s computer. I really do have to go purchase a new laptop.