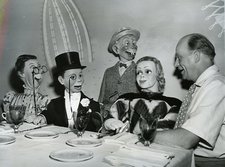 I received an email the other day asking about the wood carver, Bob Wallace. I remembered doing a blog about this a couple of years ago, so I dug through the blog archives and here is that blog.

One of the great mysteries that we all know about, and the actual answer that will always elude us, is who made the original Charlie McCarthy. It is known that Bergen of course purchased it from the Mack’s shop but Marshall more than likely worked on it. How much work Marshall did we will never know. We do know that Marshall later on made a few Charlie heads that were close. One of the more famous ones is the figure that Stanley Burns used that had crossing eyes. It was a real close example of a Charlie head.

Edgar Bergen did, later on in his career, have duplicates of his famous trio remade by a wood carver named Bob Wallace. He was from Los Angeles so he was not far from Edgar who was living in Hollywood.

Wallace was a carver of store displays and his talent was superb. He did a great job of reproducing Charlie, Mortimer and Effie and in Edgar’s hands you would have never known that they were not the original figures. Of course if you had the original figures side by side to the new carved figures there were differences.

Most of the reproduction Charlie heads that you will see for sale privately or publicly will be from castings off the Bob Wallace carved heads.

Since Ventriloquist Central is an informational web site, I am happy to share with the vent community the Bob Wallace Catalogue which shows the three Bergen characters along with some other amazing carving done by this talented man.

However, after that blog, Doug Preis member of the Bergen Foundation sent in this information for us so that everyone would have the correct information !! His response:

“The only figures made by Bob Wallace ever used by Edgar Bergen were: Frowning Charlie…Sleepy Charlie (later turned into Old Man Charlie) and a “regular” Charlie…that Bergen used very rarely…and mostly for photo shoots.

Wallace never “finished off”…nor did Edgar ever animate…or use the Mortimer…or Effie from Bob Wallace. They remain solid blocks of wood to this day. The Bergen Foundation owns them. Other copies do exist. The Wallace family has a “set” as they were duplicarved.

The photos in the Wallace “brochure” are misleading…as the only figure pictured that was carved by Wallace…is the separate larger shot of Charlie with his mouth open. The other photos are pre-existing publicity shots of Bergen with his original figures. NOT Wallace’s work.”

Thanks Doug for the information and I want to thank Ray Guyll for sharing this piece of Ventriloquist history with the vent community.