An Evening with Miss Arkansas and Ventriloquist, Alyse Eady 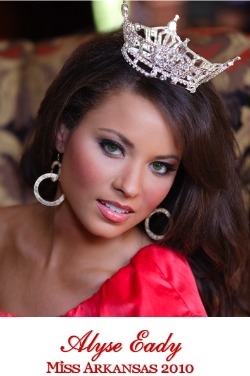 If you’re a regular reader of the Ventriloquist Central website, then you know about my partner and webmaster, Steve and his association with Miss Arkansas and ventriloquist Alyse Eady.

This past Tuesday, Steve spent an evening with Alyse at one of her events and here is his story…

On Tuesday, March 29th, I had driven to the small town of Spiro (the closest town to me living here in rural eastern Oklahoma) to do some banking when I notice a paper sign on the door with Alyse Eady’s picture.

So I immediately stopped to read it (I might mention it was raining at the time so I’m getting wet from the rain). The Spiro Chamber of Commerce was having their spring banquet and Alyse was going to be there. The banquet was on March 29th.

I quickly looked at my watch to check the date and sure enough, it was the same day. I read further to find out that the chamber was selling tickets so I quickly did my banking and drove over to the chamber office to buy a ticket for myself.

Being in a rural area like this and a small town, the chamber office was closed. However, there was a number to call for tickets, so I called and got a voicemail. Left my information and then tried to call Alyse. I got her voicemail too (I later found out she was performing at schools in eastern Oklahoma that day).

Finally a little after 5pm (the meet & greet started at 6pm) I received a call saying I could buy tickets at the door.

I showed up about 6:15pm and Alyse didn’t show up till about 6:30. As soon as she walked in (her Dad, Lewis was with her), everyone started swarming around, especially the kids.

I walked over and started talking to Lewis and we both watched as she interacted with everyone. She signed autographs and had pictures taken with her. Lewis asked me how it was going with the repair on “Rocky” and I told him slow but getting there. I also mentioned that I had other dummy projects I was working on at the same time. Alyse had not seen me yet, but when she heard the word “dummy”, she quickly turned around and smiled saying she was glad I could make it (later I found out that Alyse thought I lived further away when I was only about 8 miles away).

I was invited to sit at the “Guest of Honor” front table with Alyse and Lewis which of course, I graciously accepted.

At 7pm the banquet started. The President of the Chamber made opening remarks then when finished with that, told everyone it was time to eat and the food was setup in the back.

Since we were in the very front of the room, the lined formed quickly and we were at the back of the line. One of the organizers of the event came back and told Alyse that since she would be performing that she could go to the front of the line and finish eating in time to perform.

So, here we go, Alyse, her Dad Lewis and I walking toward the front of the line. Lewis leaned over and said, “These are the kind of perks I enjoy”, which I promptly replied, “I agree.” We got our food, went back to the table and had a great conversation.

After dinner they handed out some awards and then it was time came for Alyse to perform. I should explain right here that Alyse “performs” or does her “presentation” for all kinds of groups, schools and events. Her “performance” is not a standard ventriloquist act, but more of a “presentation” and she uses ventriloquism at different times.

This time she started off by talking about how she got to where she is today, encouraging everyone (especially kids), that they can do anything they put their mind to doing. Then she does a song using a soft puppet. After the song, she talks more and then does another song (using two soft puppets-not the yodeling song) after the talk. Once the song is done, then she takes questions from the audience. 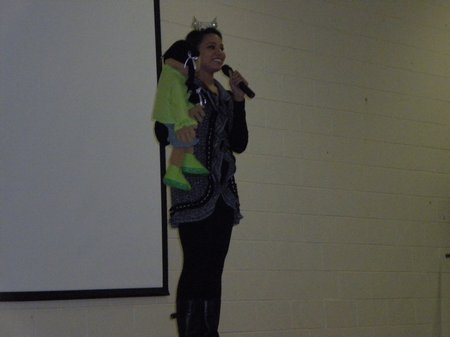 She did mention to everyone (which Lewis had already told me earlier) that she has a new job and will be the morning news anchor for the CBS affiliate television station, KTHV in Little Rock.

All in all the evening was great. Alyse and I have talked on the phone, exchanged emails, and I’ve seen her a couple of times for brief moments, but this was the most time we spent this much time together. Plus I have to add that I spent more time with Lewis talking and that was great.

Alyse’s entire presentation is a positive message for everyone. I have to tell you that I’ve seen speakers, presenters and performers of all kinds and Alyse is a top notch professional. Her message is very inspiring and her performance is great. She has a way of captivating her audience and she doesn’t lose them through the entire presentation. Like I said, top notch professional.

I’ve said it before, I’ll say it again, keep your eyes to the future, you’re going to hear a lot more about Alyse Eady!

Thanks, Steve, for sharing your experience.

2 Responses to An Evening with Miss Arkansas and Ventriloquist, Alyse Eady