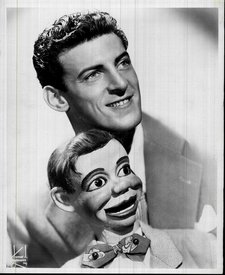 I have been sitting and thinking about the functions that Jerry Mahoney had as a figure. In his original form he had mouth movement and side to side eyes. Paul used him like that for quite a number of years but once he had his television show Jerry then had blinkers added.

I happen to know that Mr Winchell had his mouth control lever on the center front of the head stick and his eye control was on the back side. This configuration allowed him to use the figure in either hand with first finger on the mouth lever and the thumb on the eye control. This makes a lot of sense but once he added the blinkers, where was the lever for the blinkers located.

If the lever was located on the side how was it that Paul could move the eyes and make Jerry blink at the same time? I was thinking that maybe it was placed about an inch above the mouth lever on the front. In that position you could use your second finger on the mouth, first on the blinker and the thumb would still be in back.

Just some thoughts on controls for Jerry Mahoney!!