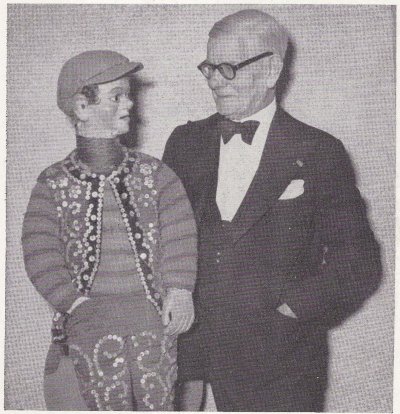 Fred Russell was a pioneer for ventriloquists. While reading the September-October, 1952 issue of “The Oracle”, I found this great article about Fred Russell that was written by W.S. Berger. I thought you might enjoy reading this wonderful article.

Brother Fred Russell (Thomas Frederick Parnell) was born in London England on September 29, 1862, and this article is written on his 90th birthday September 29, 1952. The IBV members extend to him every good wish and many happy returns of the day.

Fred Russell’s first stage appearance was in 1879, and that was when he was 17 years old. In 1882 he took up journalism as a profession with the HACKNEY and KINGSLAND GAZETTE. He studied ventriloquism under the able direction of the famous FREDRIC MACCABE, and made his first appearance on the concert stage in London in 1886. He then made his debut on the music hall stage at the Palace Theatre in London in 1896. In 1898 he published his book entitled “Ventriloquism and Kindred Arts,” which had a wide circulation,
and is now a collectors’ item. Various editions followed the original work. His act was standard for 35 years, and Bro. Russell played every music hall of note in England and performed in Australia, Africa, New Zealand, Ceylon, and in America in 1905.

One of the outstanding acts produced by Bro. Russell during his colorful career was in 1922 when he introduced his elaborate and intricate ventriloquial production, “Sylvester Vs. Fitzcholmondeley” in “Breach of Promise,” a ventriloquial farce involving a damage suit for 5,000 pounds for failure of the Defendant to marry the Plaintiff. The court scene represented a fairly accurate English Court. It required one year of continuous practice with embellishments before the first performance at L1. Ford Hippodrome, London, in 1923. The production was sensational and had a continuous run for almost three years. The actors in the cast were: Judge in wig and robe; the Jury of 12 men; the Defendant, a “Dude” in the dock; defense counsel; FRED RUSSELL, counsel for the Plaintiff; Plaintiff, Mrs. Russell; policeman acting as usher; two witnesses; and “COSTER JOE” as page boy. The actors were made by Bro. Russell from clay models and then finished in paper mache and painted and costumed by him and his wife.

The operation of the actors was pneumatically controlled by the feet from a sort of switchboard under the feet of Bro. Russell. He was assisted by Gladys (Charming wife of Fred Russell) and a stage hand to set the props. To promote increased public interest in the show, a Cpage pamphlet, giving a synopsis of the court proceedings and dialog, was distributed by the thousands at the Music Halls a week prior to the opening dates.

Later on, two more actors were added to the cast, the plaintiff’s landlady and baby, making 21 characters to control, and what a job that was as compared with the performance of this day! There is a foto of the court scene gracing the walls of the Vent Haven, bearing the autograph of Bro. Fred Russell.

At the time Fred Russell started his ventriloquial career, the performers then employed groups of mechanical figures ranging from three to ten. Bro. Russell changed this procedure. He was the pioneer of the modern method on the music hall stage, of performing a complete show with “Coster Joe” alone. Bro. Russell was the first President of the Variety Artists Federation in London and is a life member in the International Brotherhood of Ventriloquists, and “Coster Joe” is a life member in the Brotherhood of ventriloquists Dummies.

The picture which adorns the cover (above) was taken at the time Bro. Russell made his Television appearance in London, January 19, 1952. For the various contributions that Bro. Russell has made to ventriloquism, we are indeed grateful.