Woody As Used by Walter Olsen the Ventriloquist 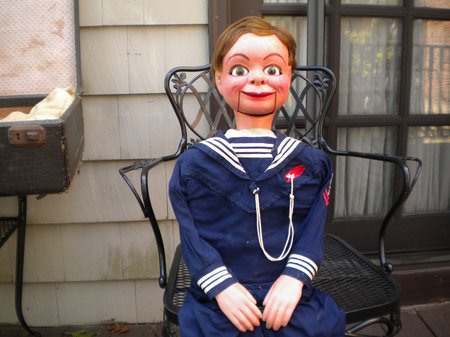 Back some time ago I was so excited to show you a pair of Frank Marshall figures that were used by Walter Walters Jr. named Woody and Mary Lou. They are great figures and really are a centerpiece of the Frank Marshall figures in the Ventriloquist Central Collection. They came to me complete with the performance stand.

Again my tree was shaken when I learned there was another Woody figure. I was totally amazed when the pictures came to me showing this Woody in his original sailor suit even down to his boat men’s whistle. I didn’t know there was another Woody and I assumed that this one had to be a back up. But upon inspection of this figure, which is all original, I think this was Walter Olsen’s Woody figure and the one, which I already had in the Ventriloquist Central Collection, is the back up figure.

This Woody is pictured in a newspaper article, which also came with the figure, and also pictures Mary Lou and Walter. The head stick has Walters signature wrap on it too. He has slot jaw, side to side self centering eyes and a winker on the right eye.

The hands also have little eye loops attached to the inside of the fingers just like the other two. This I guess facilitated movement of the hands by Walter.

I am just so pleased that this trio of figures are once again reunited under one roof.

More photos of Woody As Used by Walter Olsen the Ventriloquist

1 Response to Woody As Used by Walter Olsen the Ventriloquist