What Really Makes The Ventriloquist 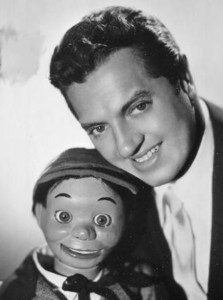 I just had to write this up after reading an article published in the Sept.-Oct. 1948 Grapevine news. In this particular issue there is a review of the now famous (unfortunately deceased) Rickie Layne.

Rickie Layne became one of the most famous ventriloquists in the 1960’s having appeared on the Ed Sullivan Show many times with his side kick Velvel.

Velvel as we all know was a toy figure which Rickie used his entire career. Velvel was just as well known as Rickie for his quick Yiddish quips to Mr. Sullivan.

He just closed eight weeks here at the Bal Tabarin. He uses a stock “Willie Talk” dummy which is the biggest fault of the act. He has a good chance of voice but at times speaks too loud with his own voice. He has lots of good gags and presents them with good showmanship.

He has plenty of ad libs which is the highlight of his some odd fifteen minutes he is on stage. He makes a very fine appearance in a neat blue suit, but he should replace his doll with a professional dummy. Rickie has also mastered some very fine Hollywood imitations, and should try to add a few more to his act for the audience ate this up. He ends the act with the dummy singing in a very comical parody of “Old Man River.”

His local gags about the place, the people and the food with a few funny insults about the boys in the band all hit home,and his encore for the audience did want more. A few minor changes and this boy could be one of the Top Ten.

This was written by Roy Douglas

Having read this article we can say it makes no difference what figure you use as a ventriloquist because it is the ventriloquist and NOT the figure that make the illusion work.

With lots of hard work and practice you can turn any inanimate object into a ventriloquial partner. I am sure that Roy Douglas would loved to have taken his words back some 15 years after the review was written.

9 Responses to What Really Makes The Ventriloquist