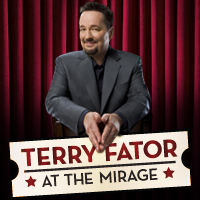 Many of you many not know that Helen and I are currently on vacation in Vegas. I just love this town. There is everything here that you could possibly want on vacation ie great weather (hot), food, gambling (if that is your thing) shows…..and speaking of shows I went last night to see Terry Fator.

This was one of the best shows I have ever seen in Vegas since I started vacationing here 16 years ago. It is a family geared show but has enough innuendo for the adults to make them very happy to have attended.

His show is the variety style too. As the attendees are filtering into the theatre there is a DJ spinning records and as the crowd gets larger he gets everyone involved and by the time the show is about to start people are up dancing and singing and you are a part of the show.

The lights flash and onto the stage comes a dancer who, in my opinion, was the best dancer I have seen since Michael Jackson and he did just that. He starts by dancing in the styles of the 50’s then 60’s 70’s right through to today. When I say styles I should say dances such like Elvis on stage, Chubby Checker and the Twist, Michael Jackson doing Thriller etc, etc, to present. It was phenomenal.

Then out comes Terry. His stage presence is just superb. He is big and he is humble. He is a master ventriloquist and an awesome singer. His delivery is perfect. His lip control is astounding and his choice of music leaves you just wanting more and more and more. His characters are developed to the point that they are alive in his hands and the material, comedy, is top notch. You are laughing when they are not engaged in song.

Unlike every other show in Vegas Terry comes out and says I know you all have smuggled cameras into the show so have a ball and take all the pictures you want. He even said you could video but requested not from start to end but I am sure if you did that no one was going to stop you.

He had a few characters I had not seen, a John Lennon looking figure and he did a great Beatles bit that was hilarious. His Crash Test Dummy was a scream and the new Winston puppet was awesome.

Terry’s show runs a full 90 minutes and when the show is done you have felt like it was only 5 minutes. It is moving constantly with the help of one of the best bands I think you would ever hear. It was a 7 piece ensemble but the sound they put out made them sound like it was a 20 piece orchestra. I guess when you get to the top, like Terry, you can have the best and it shows. Also his comedy writing must be being done by the best as well. Your sides hurt from laughing.

I did in fact contact Terry prior to coming to Vegas and we had planned on meeting but it ended up that his mother and one of his friends growing up father, who was a POW in Vietnam for 7 years, came to town so unfortunately for me our meeting was unable to take place. Hopefully I will get to see him for a meet and greet the next time.
Also as important, all the proceeds from Terry’s store at the Mirage goes to a military charity.

So take it from me, when you come to the mecca of entertainment and vacation, Las Vegas, this show is a MUST see.

2 Responses to Ventriloquist Terry Fator is Wowing in Vegas