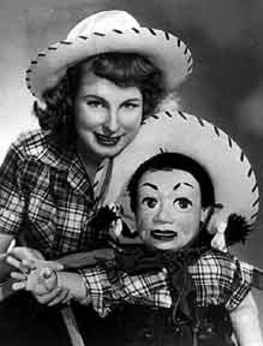 I am not sure how many of you knew who Shirley Dinsdale was but she was quite a talent.

She is best remembered for her dummy, “Judy Splinters”, and for the early children’s television show that bears that name. In 1948, she received the first ever Emmy award (first award in the first presentation) for Outstanding Television Personality. After her television career, she also achieved success in a second career as a cardiopulmonary therapist.

Shirley was born in San Francisco, California in 1926. After being badly burned in a household accident, she was given a ventriloquist’s dummy by her artist father as part of her recovery. That dummy, which she named Judy Splinters, inspired her to make her break into radio. In 1940, at the age of fourteen, she made her start on local San Francisco radio with a show entitled Judy in Wonderland. Two years later, in 1942, she and her family moved to Los Angeles and she was given a spot on Eddie Cantor’s radio program.

During World War II, she was an active member of the Hollywood Victory Committee. After the war, she made her break into the budding television industry on KTLA (also in Los Angeles) doing show announcements, birthday greetings, and small spots. These spots, while not initially prominent, garnered her critical acclaim and her Emmy award. (The award was given jointly to both her and her puppet.) After receiving the award, she was given her own Western-themed weekly children’s show (entitled simply Judy Splinters) which ran from 1949 to 1950.

In 1958 she appeared as a guest challenger on the TV panel show “To Tell The Truth”.

Richard Tampa sent this wonderful video of her on “To Tell The Truth and so it is our pleasure to share it with everyone.