RJ sent me an email and told me that he knew Ken Spencer. Since he was a friend with Mr Spencer I wrote back saying I would love to hear any stories that he may have of him and would certainly share same with everyone here on Ventriloquist Central.

RJ has been gracious enough to send in “installments” of his experiences with Ken Spencer. Today is the first of those installments. 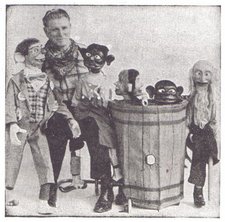 Yeah, I have a story or two; The reason I got involved with Ken was because, as a young ventriloquist, I was booked fairly frequently, using the standard toy ”Juro” Jerry Mahoney dummies; But people would often mention this other kid ventriloquist in town, who had a ”PROFESSIONAL” figure.

It began to bug me, so I tracked him down. When he took his figure out of the suitcase, I immediately knew that this was a game-changer. My envy was TOTAL! He gave me the maker’s name, Ken Spencer, WAY across town in Minneapolis.

I wrote to Mr. Spencer, and he replied with several photo cards of himself, along with a bio, AND a photographic card featuring a line-up of the figures he carved.

I WAS IN HEAVEN! One problem. The cost of one of his figures BEGAN at almost $400! [approximately 1 million dollars in today’s world] Not really, but it sure felt like it to a naive 12-year-old.