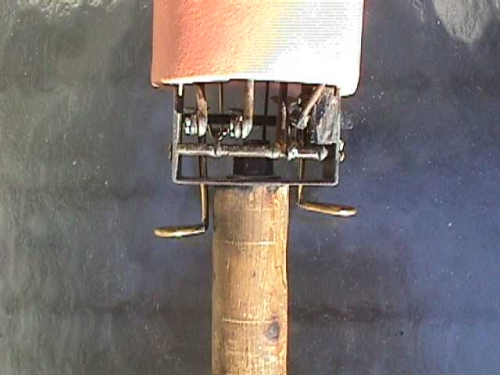 There has been much discussion on the placement of controls for ventriloquist figures on their respective head sticks. I find this most interesting because as a collector the placement of the controls means nothing because I am not performing but much has been made about first finger or thumb control for the mouth movement and also much talk about other controls for added features.

Of course since I collect, figures with multiple functions are of course more valuable and also rarer in the antique figures. Most of the figure makers right up to present day offer all sorts of functions, but I think the movements that are most important are mouth and eyes.

I know everyone is going to say all that is needed is the mouth control because as long as you can give your figure the right kind of movement his moving mouth will take care of the rest of the effect. Edgar Bergen was the master of course for this.

Jeff Dunham today does a fantastic job breathing life into Walter and he has mouth movement and raising eyebrows only. People will say his eyes move too but not so. They do not.

Many say that the controls become confusing when there are too many functions and that may be so for the beginner, but with lots and lots of practice the controls become second nature. You must remember that the added functions other than the mouth and eyes are used very infrequently and just to really emphasize an expression.

Now with the Marshall figures his ” chop stix ” levers were placed in a very effective design and are really not very hard to learn. His mouth lever was either on the right or left side of the post with the eye control placed in the front center of the post. Easily used by either hand as far as I can tell.

Opposite side to the mouth was usually the levers for the closing eyelids. if the figure had an upper sneer effect that lever was placed behind but next to the mouth control so that you could pull both together to give the wide open mouth effect. If the figure had double winkers/blinkers those levers were also placed next to each other. So the use of these levers were not all that hard to learn or find.

I have given a picture of this style Marshall head stick for you to see. One is fully loaded the other is just mouth, eyes and one eye winks.

Ray Guyll, one of today’s premier builders, still uses these style controls on his figures and also still does his controls with the use of cord. He can do all direct linkage but will tell you that is simply not needed. If your direct linkage breaks when you are on a job you are lost. If a cord breaks you can repair it on the spot. I guess I will correct that and say most of the time you can repair it on the spot.

There has been talk of the inline control systems that are now being used by makers like Selberg and Alfaro and Cowles and those are great but they present the same thing as the old style. You MUST learn where each control is located before you can perform with them comfortably.

The rest of the controls were in the box with typewriter style keys and those you really had to work with to learn how to use but for the most part the mouth was the function because the eyes moved on their own. I have included a picture of these controls too.

So to sum up, from my observations and collecting I think it makes no difference how many functions your figure has, you must practice practice and practice some more until your figure moves and responds without you even having to think. A very hard feat to accomplish but once learned you have created the illusion the pros have under their belts.