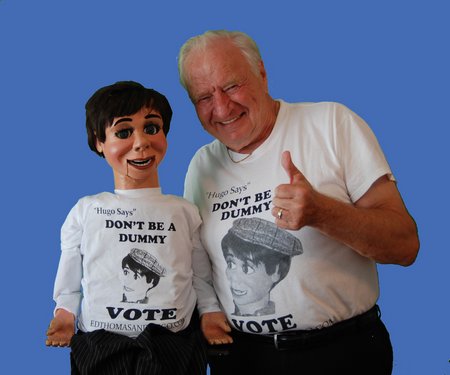 Ventriloquist Ed Thomas and his partner Hugo sent in this press release. It even has a quote from my partner, Steve Hurst.

August 2, 2012 (Altamonte Springs, FL ) – Comedian/ventriloquist Ed Thomas of Altamonte Springs, Florida and his dummy partner, Hugo, are performing shows with the message to get out and vote. The act is themed around the idea that only dummies don’t vote. Thomas said, “This was Hugo’s idea. He was upset that he couldn’t vote because he is a dummy, so he wants to be sure that everyone who is not a dummy votes.”

Thomas, who performs throughout the United States with Hugo, has noticed that people are becoming more interested in complaining about politics. He believes if you don’t vote, you don’t have a right to complain. Hugo agrees, which makes this the only thing that Thomas and Hugo have ever agreed on. Everywhere they perform, they wear matching shirts that say, “Don’t be a dummy – VOTE.” Thomas and Hugo give the same shirts to the audience.

“Ed Thomas is a master performer, and I love that he is using comedy and ventriloquism to get a message out to encourage people to vote,” says Steve Hurst, co-founder of Ventriloquist Central, a leading ventriloquist website. “Nobody wants someone to tell them what to do or to preach about the importance of voting, but Ed does it in a way that makes you have fun and want to cast your ballot.”

Ed Thomas and Hugo have performed together for more than 50 years. They were the first ventriloquist act to perform on TV in the state of Maine. They perform together at theme parks, civic clubs, comedy clubs, conventions, and much more. For more information, visit www.edthomasandhugo.com or call 407-332-7233

If you’re interested in one of Ed’s and Hugo’s t-shirts, you can check them out on his site:

1 Response to Ventriloquist Dummy Hugo Encouraging Others to Vote