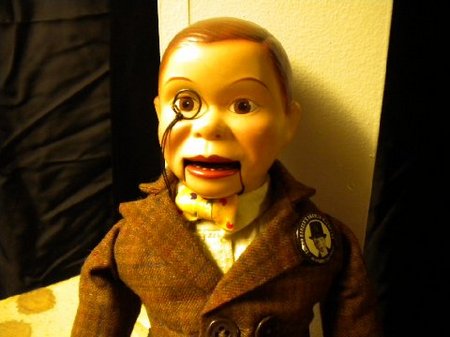 I am asked quite often why I don’t show more of the toy ventriloquist figures on Ventriloquist Central. Well the answer is really quite easy. I no longer purchase the toy figures for the collection.

When I first started to collect figures I purchased every style of toy figure there was that I could find and the reason for that was they were not too expensive.

At one pint I think I may have had over 50 of the different Jerry Mahoney, Danny O’Day and Charlie McCarthy figures. I also had the Simon Sez figures Haley O’Hara and Carol Channing.

I also had the goggled eye Velvel as well as the painted eyes. Then I purchased my first antique vent figure, a wood carved Foy Brown figure, and new those were what I wanted for my collection.

I sold off all the toy figures except for the Effanbee Charlie McCarthy which was made in the late 1930’s and I also kept a few early 1950’s Ideal Toy Howdy Doody dolls with the sleep eyes and pull string for the mouth.

I was a big Howdy Doody Fan back in the early 50’s. I also kept the 1966 Jerry Mahoney and Knucklehead Smiff dolls which were released by Dr. Winchell himself. Exact likeness of the original figures made me keep them.

All the rest of the toys I sold off and concentrated on the wood carved antique figures. I have purchased a few early and rare toy figures in the not distant past but they are not the Juro or Goldberger toys.

I don’t think those will ever be a part of the Ventriloquist Central Collection unless they are donated. I never sell anything that is given to the collection.