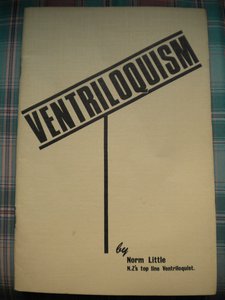 A good friend of mine, Dave Jeffries, sent me a copy of a book on ventriloquism which was written by his uncle Norm Little, one of the pre eminent ventriloquists in the early television days in New Zealand. Norm used a ventriloquist figure named Archie, a Len Insull figure, and added a monkey figure later on named Tiny to his act.

Norm was assisted by his wife Bev and they also did a magic act and Bev was put in a box and swords plunged through it and she was also used in the cutting a woman in half illusion.

Norm is in his late 70’s and works today in an upholstery shop but he and Archie still perform for children in the area where he lives in semi retirement.

Norm’s book was published in the 1960’s and it was a complete treatise on the art of ventriloquism. He talks about the origins of ventriloquism, the ventriloquist’s alphabet, lip control,figure manipulation, misdirection and even distant voice. 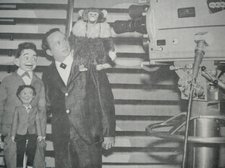 Included in this book are 5 different dialogues which can be used to get the novice started in ventriloquism.

All ventriloquists will eventually have a mishap where a string will break and norm even gives some fine detail as how to cope with this dilemma while performing.

This is a book of only 32 pages but the material covered and the explanations given as still pertinent to the performers of today.

I believe this book is still available to purchase today and I will find out the information on that and will report that back as soon as I can.