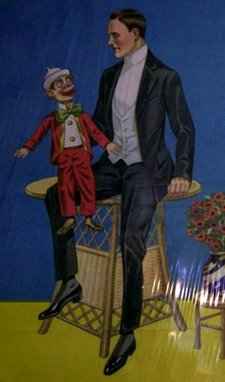 I myself certainly think that if you can do something easily why complicate it ? It was made clear to me in the study of my guitar playing. I love playing chord melody on my guitar and one of the masters of this style of guitar was a fellow named Barry Galbraith who was a studio musician back in the 1950’s. He was a most talented player but always said that the simpler you make the playing the more you will get out of it. His interpretations of many Standard tunes shows this off.

When it comes to manipulating your ventriloquist figure, again simple can be the best. If you have your figure constantly moving for no apparent reason this is no good. If he never moves that too is no good. You have to find that happy medium but again keep it simple. Functions of a figure can be the biggest thing. Most everyone who is new and gets into ventriloquism sees the figures loaded with functions and wants one that does everything. That is totally understandable but is it necessary to use all the functions? I think not. In fact most of them are not needed and might never be used. It takes many years of constant practice to find the right dialogue or script where all the different functions are used. You would maybe use wiggling ears once in a routine but how many more times would they be needed? The same for other functions like flip wig or wiggle nose.

Edgar Bergen, who many will say was the best at manipulation of a ventriloquist figure in the twentieth century, used mouth movement only on all of his characters, Charlie McCarthy, Mortimer Snerd and Effie Klinker. His manipulation was smooth and precise and simple. Moving his figures only when needed. Many say his lip control was not so good but it didn’t matter because when his figures were talking they were who you looked at not Mr Bergen. He was a master of manipulation. If you are new to ventriloquism I suggest you click on the Tribute To Ventriloquism section and go to the video section and look at the master at work.

When it comes to choosing a ventriloquist figure I, unlike most, do not have to worry too much because I am a collector and I love most all figures and the look they have is secondary to me at best. This makes my search for figures super easy. But for all those that are performing then choosing a figure has a few criteria that you must consider.

I think that the most important thing the ventriloquist has to decide on is the personality that the figure is going to have. Case in point is Jeff Dunham. He knew that he wanted to use an old man, with a grumpy disposition so he first sought out some ideas on how he would look, and if I am not mistaken Bill Nelson came up with the character, then Jeff went about having his figure made, and hence the birth of Walter. To say the least Walter is an old curmudgeon. Walter certainly has his own personality and everyone knows exactly what to expect when he arrives on stage with Jeff.

After you have found the character and the character’s personality , I believe , you must then find the correct skit or dialogue that will bring you in the laughs. Lets face it if you can’t sing and do impressions like Terry Fator then you must have comedy. Laughter is the key and you must be able to make that figure’s personality create laughter or you will never go anywhere. Of course if you are doing ministry none of this pertains but I am talking outside of the ministry. It would behoove anyone to watch the old masters at work. They either wrote or had writers that wrote great material for them. Bergen, Winchell, Nelson and now Dunham can show you the way to creating the type of laughter I am talking about.

So to sum up in my opinion simple is for sure the way to go when doing ventriloquism. Do it simple but do it right. And find the right ventriloquist figure for you to use as your partner.