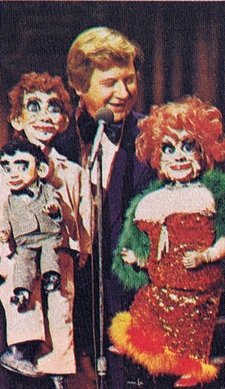 After having the heads listed for sale on the Ventriloquist Marketplace for sale I was first contacted by Ray Guyll who told me that in his opinion the heads were made by Lou Dupont, a ventriloquist that lived and performed in Las Vegas.

I was then also contacted by Marcelo Melison, who sent a picture (above) and also said he believed that the heads were by Lou Dupont and they look like they could be back up heads for his two main characters.

I then found this video on youtube: http://www.youtube.com/watch?v=E5xmtvv1o-U (viewer discretion advised)

I have to agree with both Ray & Marcelo that these heads are in fact made by Lou Dupont. I did in fact also purchase them from a contact in Las Vegas.