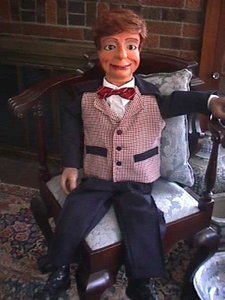 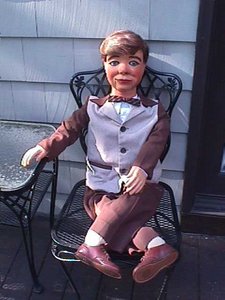 As strange as it may seem I keep getting asked why I dress my figures in the two tone suits. I must admit that kind of became an obsession with me. I scour the used clothing stores and go on line looking for those suits all the time.

I think the answer is because of my love for the Frank Marshall figures and Paul Winchell. My first recollection of ventriloquist figures is Jerry Mahoney and of course he was dressed in the 2 tone suit.

Then when I purchased my first all original Nosey figure by Frank Marshall it too was dressed in the original clothing which was a blue two tone suit. So after that I just had to find those suits.

Those two tone suits were popular from the 1940’s through the mid 1960’s. After 1965 or so they faded into history. So finding them today is not easy. I have even given an original suit to a seamstress friend of mine who has recreated them for me. The problem is the are expensive but they sure do look good on those figures.

I guess it is just a matter of taste but for me the two tone suit is just my favorite outfit on a ventriloquist figure.