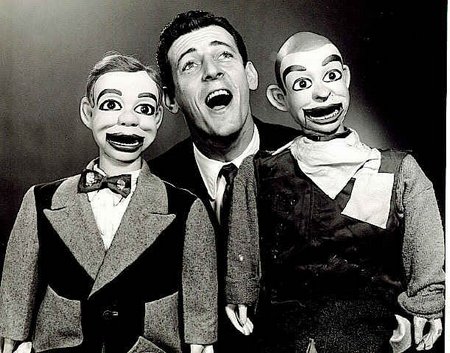 During the early days when Winchell was performing with just Jerry Mahoney, Jerry would make comments about his pal Knucklehead. There was so much fan mail to Winch asking to see Knucklehead that he finally decided to make Knuck.

Winchell had back up Jerry Mahoney figures so he used Jerry as the Armature for Knuck. The over sculpting resulted in a change of the nose to the what I call inverted spoon shape, and also the crooked mouth. If you look close at Knucklehead you will see that his mouth is crooked. I am not sure if this was a mistake on Winchell’s part but in any case he saved it. So with crooked mouth, different shape nose, cockeyes and bald head the wild character Knucklehead was born.

When Winchell had games on his TV show prizes awarded would be his character dolls. First prize was always a Jerry Mahoney and the runner up would get a Knucklehead. It is Ironic that today if both winners still had their prizes the runner up has the more valuable figure. Knucklehead is worth 3 times the value of the Jerry.

Anyway just some thoughts of a Ventriloquist Figure collector.