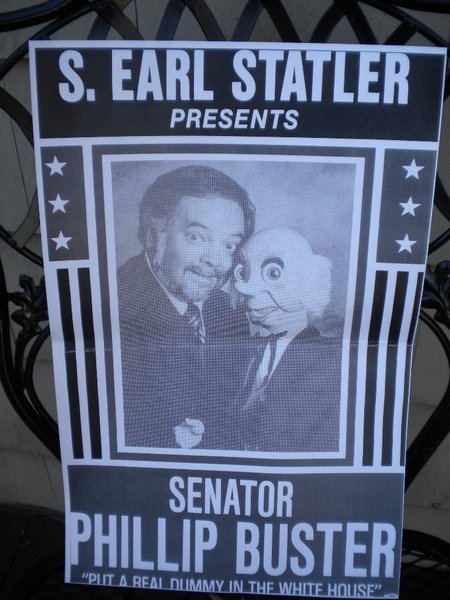 When I acquired this rare old man Rene ventriloquist figure I post that the original owner was S. Earl Statler. I received an email from him with the “rest of the story”….

I had Rene’ make the custom figure in 1972 for a vent character I created with an old friend Edger Bergen while in rehearsal for a West Coast musical premier of “Happy Side of the 30’s” starring Donald O’Conner, Marylyn Maxwell and Edger Bergen. The show was a flop and Charlie, Effie and Mortimer were as usual a hit!

Senator Phil A. Buster’s first form was a Rene’ marionette orchestra conductor just as you see him (waist-up). Rene added the lower body and legs. At that time neoprene and cylastic were popular molding materials in the studios and Hollywood prop houses. The figure was heavy and so was I (LOL) so his weight was no problem then.

His debut was at the Hollywood Magic Castle and a subsequent performance contract was cut for West Hollywood’s Studio One Backlot Cabaret’. My competition there and at various night clubs around the country was Wayland Flowers and Madame. Wayland and I were good friends so I stayed clear of the West Coast dates and concentrated on my other business as a Technical Director for a plethora of stars and venues across the country.

The Senator sat in retirement until Dan Payes saw one of my night club posters for sale on E-Bay and I traded the Rene’ figure for two new Payes figures, Senator Phil A. Buster and his wife Eylayle Balls Buster. I am happy to announce that their daughter was married at their GA Plantation “Peckerwood” last June to the famous gynecologist, Dr. Robert Hyman…making her, Ina Mae Buster Hyman.
The Senator is thinking of runnin’ for President in three years, he has now thrown his hair piece in the political arena. So far his sponsors are Depends & Geritol!
S. Earl Statler,
America’s Raconteur

Thanks for sending in this email Mr. Statler.