Pricing On Ventriloquist Figures Can be Strange 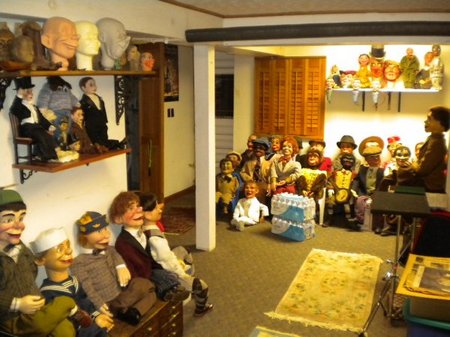 Paying the price is the way to build a collection no matter what the item happens to be. Collecting any item has some that are worth a lot and some that just are not worth a lot.

When it comes to ventriloquist figures this is also true and I know because I certainly have paid the price to acquire many of the figures in the collection. But that being said in the vent figure collecting there is something that really confounds me. I will explain.

Frank Marshall figures command the high prices. We all know that but what is the reason for that? I have been thinking about this at great length. I think the reason is because he was the maker to most of the most famous ventriloquial names. Bergen, Winchell & Nelson and a hole host of other famous and not so famous ventriloquists. He really made a name for himself in the vent world so everyone wanted his figures.

That being said there were other makers during the so called golden era, 1930 to 1960.that also sold figures to many well known ventriloquists. Ken Spencer made some very fine figures but they certainly don’t command exceedingly high prices. Or how about Revello Pettee? How many of his figures have you seen for sale lately, but the price if you did find one is not going to be outrageous. Even figures made by the Macks, who taught Frank, just don’t bring is the fabulous kings ransom.

I guess Frank really knew how to promote himself and his work and because of that his figures are the ones everyone loves and wants or could it just be because he created such great characters??

I will continue to ponder.

3 Responses to Pricing On Ventriloquist Figures Can be Strange