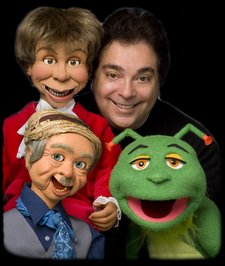 I am so excited to be able to announce to everyone that professional ventriloquist Pete Michaels will be our guest on Ventriloquist Central Blog Talk Radio.

Pete first appeared on stage at the tender age of five. His fascination with music, comedy, puppets and ventriloquism also began as a child; with his influences being Edgar Bergen, Paul Winchell and Jimmy Nelson.

He continued performing during his high school years, often playing the musical comedy leads. An alumnus of The American Academy of Dramatic Arts in New York, he furthered his acting studies with Weist-Barron and studied voice with Robert Marks.

He developed his talents further by showcasing his comedy and ventriloquism at numerous venues. Pete continued to perform in Comedy Clubs and on Cruise Ships, quickly gaining wide acclaim and was soon a regular at the world famous Apollo Theater with his black puppet pal; Woody D.

The duo performed dozens of television shows, concerts and special events at the landmark venue. With major TV and Film credits like: Dummy; with Oscar winner Adrien Brody; Late Night with Conan O’Brien; Showtime At The Apollo; Canada’s: Comedy At Club 54; Uptown Comedy Club; Comedy Central; Let’s Laugh with Sherman Hemsley, and many others– It’s no wonder why Pete Michaels is one of the most IN DEMAND performers today!

Pete has been a driving ventriloquial force in the Northeast part of the country for a couple decades and certainly can answer most any question you could possibly have concerning this great art form.

If you’re not going to be able to listen to the show live please send in questions for Pete and I’ll be glad to ask them for you.

Be sure to tune in and listen to this show. You won’t be sorry.