This just in from Mark Wade, Executive Director of Vent Haven!!!!! 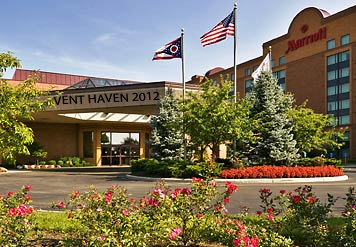 IMPORTANT NOTICE TO ALL VENTS!! NEW LOCATION FOR ConVENTion 2012

Thats right..the Vent Haven International Ventriloquists ConVENTion has a new home. After being associated with the Drawbridge Hotel for 35 years, it has been decided to find a new place to hold the ConVENTion. Starting in 2012 our new location will be the Cincinnati Airport Marriott Hotel in northern Kentucky (Hebron, KY), just minutes away from the Drawbridge Hotel and the Greater Cincinnati-Northern Kentucky International Airport. Please check this site to get a glimpse of our new ConVENTion home:

I wanted to address your concerns about the Drawbridge Hotel and why we stayed with them as long as we did. Almost a decade ago the Drawbridge Hotel was the only facility close to the Vent Haven Museum that was large enough to hold our event. It had the largest meeting rooms, and was convenient to the everything. Until recently there was no other place to rival the Drawbridge for space. But in time the local situation changed with the building of new hotels, but we were looking at a signed contract deal that pinned us down for a long time (done to insure we would have a place for the ConVENTion, in July of each year).

Over the years the quality of the buildings at the Drawbridge Hotel started to deteriorate .new owners came and went and the hotel recently went through receivership. It was barely kept open by a skeleton crew of employees, waiting for a buyer to purchase the property and to make vast improvements. We waited patiently through all of this, all the time being reassured that NEXT year we would see great, new things. That never happened.

Needless to say we were frustrated like you. We were deep into a contract deal in a hotel that was falling apart. It was a long term contract that began in 2005 and was to end in 2012. The contract was played out to almost the end, and when we could finally step away from the hotel contract with out incurring a huge penalty (it was $10,000 to break the contract) we did so. Being closer to the end of the contract, and having given proper notice , we were able to finally search for a new place. We discovered the Cincinnati Airport Marriott Hotel !

This place is great!! All new rooms, free wireless internet (which we negotiated and got for you..),flat screen televisions in each room, plus the quality of the Marriott brand to back them up. This hotel is rated in the top 10 of all the Marriott chain. The room rate is a bit more..a flat $99. Per night whether it is a single or a double occupancy , but the rooms are newly remodeled, with new mattresses and bedding. This place is worthy to be called the home of the worlds largest ventriloquist convention! I will post more in the coming days and give you some further info.