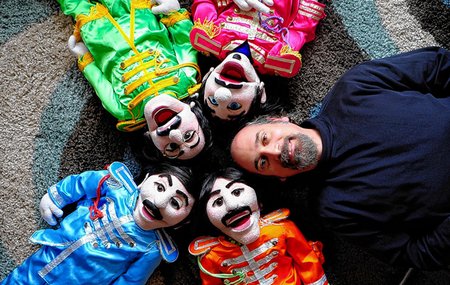 Next week will be the 50th anniversary of the Beatles performing on the Ed Sullivan show. With that in mind, our good friend, Bob Abdou sent us this article about him and his upcoming performance at the Official Beatle’s Convention.

It all started 19 years ago, the first time my Beatles puppet show was seen by a live audience.

The place was the open mic session at the 1995 Ventriloquist convention
To get everybody in the mood, I printed tickets and passed them out as my fellow ventriloquists entering into the main room. (see photo)

I recruited 3 volunteers to help me recreate the Ed Sullivan show of February 7th 1964 (see blurry photo and performance picture). Nobody will forget those dark paneled walls. 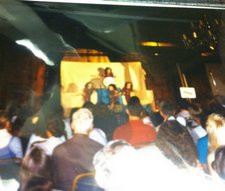 This was the first time anyone has seen Beatles puppets, I actually got business cards printed using a Beatles theme. Do you recognize the location on the business card? That’s the pool area at the Drawbridge Inn

Now performing for my 19th year in a row at the only Official Beatles convention in America, It is like a dream come true. Performing with many great artists associated with the Fab 4. My show features marionettes, hand/rod puppetry and ventriloquism. 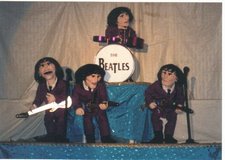 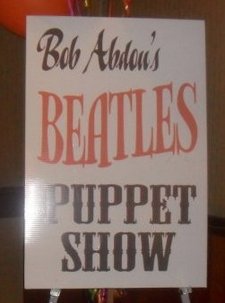 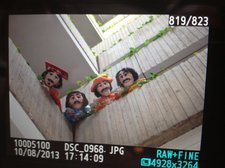 Next week will be the 50th anniversary of the Beatles performing on the Ed Sullivan show. The publicity will be off the hook, with the 2 new acts premiering next week that now makes 28 different acts I have created since that early performance at the ventriloquist convention.

Please check out the photos & video on my website
www.mrpuppet.com