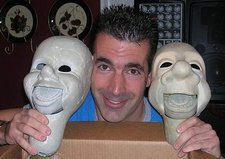 One of the ventriloquist figure builders that stays kind of in the shadows but I feel is a great asset to our community is Mike Palma. He has created quite a few ventriloquist figures and recently he sent me pictures of some of his work and latest creation which I really liked.

So I asked Mike if he would give us a little history of what he does and then send me pictures of the process for his latest creation. He kindly obliged my request so read on and then take a gander at the figure Mike has come up with for the vent community. I think you will agree it is fabulous.

So how does one get interested in the art of ventriloquism? Well, for me it was at a very early age. As a matter of fact, As far back as I can remember, I have been surrounded by Magic and Ventriloquism! You see, my father was a Magician and Ventriloquist and that’s where it all begins!

I have always had a love for both magic and vent, but I seemed to be drawn more toward the vent side of it. I have a picture of myself at the age of 3 years old with my first Willy Talk vent doll. When I was young (pre-teens) the only vents I got to see were mainly Willy Tyler and Lester, Jay Johnson and Bob and that was about it!

Every now and then I would see a clip of Jimmy Nelson and once got to see Edger Bergen on the Muppet Show, but I wasn’t lucky enough to see any of the earlier great vents. I had heard from my father and grandmother how great Winchell was, but it wasn’t till I was 26 years old when I first saw Paul Winchell and Boy what a treat that was!!

My father bought me my first Pro figure when I was about 10-11 years old. It was a Maher workshop/ Lovik “Jingo”, which I perform with till this day. The figure, now called “Eddie” has had a face lift, (re-carved, painted and wigged) by Chuck Jackson back in about 1990. It was about this time in my life that I wanted to learn how to make figures.

I remember getting from Chuck Jackson, his catalog which contained pictures that would change my life for ever! These were the photos of the “Nelson/Jackson” line of figures! I had never seen figures like this before! I have always had the love for the traditional classic cheeky boy, like Mahoney and O’Day, but these new and different figures were just amazing to me!

I wanted to learn how to make figure like these however my early work was disastrous!! I bought all the books on figure making at that time (I think there were 2), but they were very limited and the one thing I knew for sure was I didn’t like working with plastic wood!

As time went on I learned how to make latex molds like Howe Olson used to make them, but couldn’t find anything good to cast them in. I tried Paper Mache, Plastic wood, Epoxy Resin and was able to cast some “Ok” heads, but never anything like the pros were turning out.

Along the way I met 2 men who would help me guide me and critique me. With there patience and mine, we formed a friendship that continues to last. The first man to really help me was Conrad Hartz! Conrad taught me things from shapes, dimensions and symmetry of a figure head to how to install mechanics, you know little tricks of the trade. With Conrad’s help, I was starting to make some nice figures, but the only thing lacking was the finish! No matter what I tried, I could not get that great paint finish like Conrad did.

This is where the second man comes into play. I had built a classic boy figure about 6 years ago (2003) and had it on eBay for sale. I saw that I had a question about the figure in my mail box. When I opened my mail, it was from Bill Nelson! I was stunned! He thought I did a very good job with the figure and of course, I had a lot of questions for him since I was a BIG fan of his from back in the Nelson/Jackson figure days.

Well to my surprise, I found Bill to be one of the kindest and most help people around (Along with Conrad)! Bill informed me of a course that he has on line that teaches you how to paint. Well, I took the course right away and before I knew it, I was showing big improvements on my finished product (figures)! Bill has also taught me to start creating new and different type figure so when someone looks at my figures they know instantly who made it. You can always tell a Hartz figure, a Marshall figure, a Lovik figure and a Nelson figure by how it looks and how it’s painted and that is a good thing! The nice thing about both Conrad and Bill is if you have a question, no matter how busy they are, they find time to answer your questions. I feel very lucky to have had these two figure makes to learn from. What I learned from Conrad and what I have learned from Bill allow me to create my own style with shades of both in my work.

There are 2 other men who have helped me in one way or another over the last 10 or so years and I feel I must mention them because they have had a big influence the art of ventriloquism in. They are Mike Brose and Al Stevens. Both men have contributed there help not only to me, but to anyone who can access the internet. With Mike’s book, “Figure Making Can Be Fun” (which you can by at his web site)and Al’s Step by step process of making a figure, which you can also find on Mike’s website, They have taken the hard work and mystery out of figure making! I only wish I knew them and had this information before I started making figures, they could have saved me time, money, headaches and all the gray hair that has to be covered with a dye now!