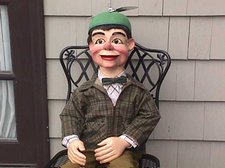 Before I became involved with collecting of Ventriloquist figures I was deeply involved with collecting antique magic. I am a member of NEMCA (New England Magic Collectors Association) and have enjoyed that end of collecting for many years. I decided to back away from magic collecting because my son, who is a full time walk around magician in restaurants, was getting older and making waves in the magic community and I didn’t want to take anything away from his development.

At one of the NEMCA conventions I was chatting with John Gaughn and he was the first person to tell me about McElroy figures. He owns the Johnny figure which originally belonged to Dell O’Dell. So my involvement with the antique magic really helped.

Recently I was in contact with a fellow magic collector who informed me he had an old ventriloquist figure that he thought I may like. He sent me photos and it was a really nice Ken Spencer figure. He decided that money would not take the figure so I had to find magic that would twist his arm. I knew just the right item. I had purchased, about 15 years ago, an item which is called a Glass Spirit Clock. It is a 12″ glass clock dial with a chrome hand which spins on a pin on the dial. The effect is you ask a spectator to call out a time, place the hand on the pin, and spin the hand and the hand stops on the exact time called out. 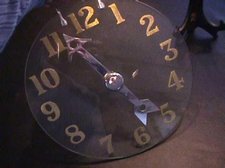 When I offered this to the magic collector it made him say yes and we made our deal. The Ken Spencer is now here in the Ventriloquist Central Collection and I thought you would all like to see him. He has slot jaw, side to side moving eyes, his left eye winks and his eyebrows raise. All his paint is original too. He is full size standing 40″ tall and I think he has a great face.

When I dressed him in the vintage cloths and put the propeller beanie on his head the name Scooter just popped into my head so I am calling him that, SCOOTER.