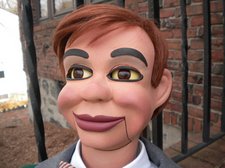 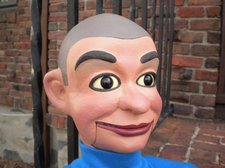 Over the years I have had quite a few of the Jerry Mahoney and Knucklehead Smiff figures go through my hands.. I was contacted again about a pair of figures and of course I said I was interested. The seller and I agreed on them becoming a part of the Ventriloquist Central Collection and soon they arrived. I of course was excited to get them because as a baby boomer Jerry and Knuck were my favorite ventriloquist figures and watching their TV shows was a regular occurrence every week.

As I unwrapped the figures I got very excited because in my mind I was expecting the Jerry Layne creations, which are nice, but to my surprise this pair of figures I instantly recognized as being made by none other than Ray Guyll. I know his paint and these figures just screamed Ray Guyll. So I sent him some pictures and here is his reply to me…..

Hi Dan,
The enclosed pictures you sent me of the Jerry Mahoney and Knucklehead Smiff figures have a really neat story behind them. Steve Meltzer, from California, came to visit me back around 1994 or 5 just at the end of my dealing with Paul Winchell on the Jerry Mahoney and Knucklehead Smiff figures. He asked and I complied with making the duo for Steve and the pair that you have is the pair I made for him.

They are special indeed as the Jerry is the only stock Jerry that I did with the blinkers. However because Steve was leaving to go home and wanted to take the pair of figures with him I had to take some shortcuts in order to get them ready. For example the whites of the eyes were not painted but Steve was satisfied even though he knew that the casting white would eventually turn yellow. The paint appears to be original but the head sticks were originally made of polyurethane and have since been partially replaced with wooden dowels by someone.

So you certainly have a very rare set of the Winchell characters and I am extremely happy to see they are now in the Ventriloquist Central Collection.

Now I said I was contacted about these figures for the Ventriloquist Central Collection and it was by the widowed wife of Earl Kress. He was a writer and has some pretty special credits to his name but sadly after a bout with Cancer he passed on and that is why his wife contacted me. He had this pair of figures and Jerry Mahoney sat in a directors chair in his office and Knucklehead Smiff was at his home in his den. He was a big fan of Paul Winchell so he purchased these figures and had them since 1997. You can learn more about Mr Kress here http://tfwiki.net/wiki/Earl_Kress and here http://www.imdb.com/name/nm0470928/?ref_=fn_al_nm_1

I hope you enjoy seeing these superb examples of Both Paul Winchell and Ray Guyll’s building talent.

(P.S. Ray will be at the Ventriloquist Central Birthday Bash!!!)