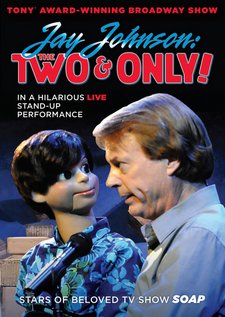 This was sent to us from Bryan and Marge …..

JAY JOHNSON: THE TWO & ONLY!, our latest feature, will have a big screen premiere at the historic Egyptian Theater in Hollywood on WEDNESDAY, DECEMBER 3rd at 7:30 PM. Built in 1922, The Egyptian Theater hosted the first World Premiere ever, and we are proud to be a part of that great tradition.

“What a treat!! Jay Johnson dazzles us with his magical gifts and comic savvy.” — Leonard Maltin

Shot with eight simultaneous cameras, this big screen adaptation of the Tony Award-winning, stand-up comedy memoir features master storyteller Jay Johnson as he traces his artistic ascent within the world of ventriloquism. Johnson, who rose to fame playing the schizophrenic role of Chuck and Bob on the groundbreaking TV sitcom SOAP, showcases his immeasurable gifts through dialogues with his hilarious and outrageous ventriloquial personalities and ultimately re-imagines and redefines the wonderful art of ventriloquism for contemporary audiences.

Tickets for this event are only $11.00 for adults and are available at fandango.com. Advance ticket purchase is recommended.

All proceeds from this exclusive event will benefit the non-profit American Cinematheque film archive, our sponsor and operator of the Egyptian Theater.

In addition, advance DVD copies of the show will be available for purchase at a huge discount.

We hope you will come out, see the filmed translation of this amazing Tony Award winning Broadway show and hang with us for a while.

Thanks for letting us know!!