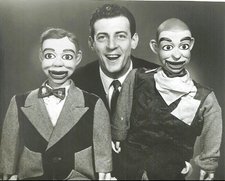 The Los Angeles Guild Of Puppetry is honored to present this film reviewing Mr. Winchell’s remarkable career. A pioneer of early television in the 1950s and 60s, Paul Winchell was a major star along with his characters Jerry Mahoney and Knucklehead Smiff. Winchell went on to create many familiar voices in animation, including Tigger for Disney’s Winnie the Pooh, Dick Dastardly, Gargamel and many others. 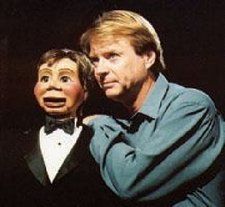 After the film we will have a rare personal visit with ventriloquist Jay Johnson. Jay has long been considered one of the best ventriloquists working today. His first success came in the 1970’s on the ground-breaking comedy “Soap.” He shared the stage with Edgar Bergen on the now legendary “Vent Event” special on HBO. Jay won a 2007 Tony award for his Broadway tour de force “The Two and Only.” Jay will speak about Winchell’s influence on puppetry and his own career.

Thanks, Steve for letting us know.

NOTE: You may use this blog article provided you run it with the bio box intact. Please email a copy of your publication with the blog article in it to:
webmaster@ventriloquistcentral.com

This entry was posted in Paul Winchell, Ventriloquist Jay Johnson. Bookmark the permalink.