Before I get started with the subject of today’s blog, I just wanted to take this opportunity to celebrate all the great moms out there – it really is the toughest job in the world.

Over the past week and a half, while the Frank Marshall figure was on eBay, I received many emails from folks wanting to know particulars about this figure.

I hesitated in writing back to anyone as well as not writing into the Worldvents about the figure because I did not want to jeopardize the sale for the listing person. I don’t think that it would have been very fair of me to have done that to him or her.

With that being said here are my thoughts on the figure after the sale. I have to take my hat off to the buyer because they paid an astounding price for a figure that had so many problems.

I read the few comments that were posted on Worldvents when this figure was first listed and one person said it needed work. Another said it should be left original but I don’t think he really looked at the pictures because there was nothing left that was original other than the wood head was carved by Marshall and the eyes were original and the leather winkers (maybe) but you could not tell as they were not pictured closed.

The paint was totally redone and then touched up again. The eyebrows were more than likely added to the figure by Finis Robinson. He used to cover the brows with hair like these (I used to have a Finis with this exact type of eyebrows). 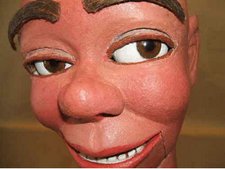 The lever was a brass lever screwed to the bottom of the head stick which was certainly not done by Frank Marshall. Also the shape of the brows and how they were attached were nothing like how Frank did them. 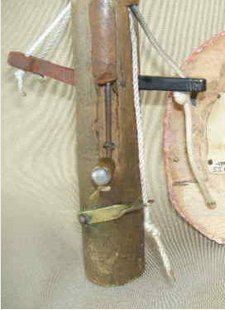 The other levers were worked on and you could clearly see one had been replaced. The inside pictures of the head showed the globs of wood dough that had been added, slopped on and the block of wood across the top. Not the work of Frank Marshall 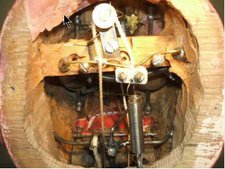 The body looked like the top board may have been replaced. The flat section on the top where the socket hole was certainly a typical for Marshall bodies. 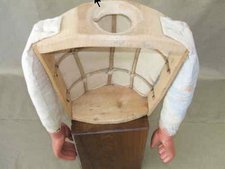 The name on the bottom board of the body was impressed (I have never seen that done) all the bodies in the Ventriloquist Central Collection have a purple rubber stamping of the name. The legs had joints in the knees suggesting that they may have been wooden. Frank certainly did that but it was on his walking figures and this was a knee figure. This leads me to believe the legs were not original. 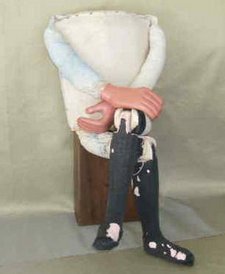 As a collector of Marshall’s work, I prefer originality. However, I liked the figure but believe there will be others that will be much better to come along.

6 Responses to Frank Marshall Ventriloquist Figure on eBay, A Record??