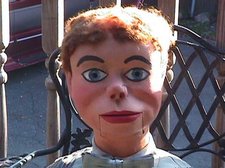 As I look at all the Frank Marshall ventriloquist Figures in the Ventriloquist Central Collection I can say that Frank did make many to look alike but he also did make some very unique faces as well.

Frank was known to use the duplicarver for producing his heads, I have a few of the duplicarver heads as well as the Vent Haven Museum, but I do believe that in many cases Frank would take the head from the machine with much of the detail not carved out so that he could make the face he wanted. Frank’s duplicarver was not on the premises of his shop as no one ever saw him using same.

It has been said that Frank liked to make figures look like the person that was buying the figure but I am curious if he used a photograph to go by for the features. When he did Paul Winchell’s first figure Paul refused it because it looked too much like him and instead took a completed Nosey, a catalogued figure instead. I wonder what happened to the figure that looked like Paul Winchell? I am sure it was a good looking figure. Maybe it got re carved after the fact.

In any event Frank was a master at carving and his variety of faces confirms this. The only exception would have been when he was inebriated because then he was not such a good carver.

At these times he certainly lost his touch. Check out the figure labeled above (picture or link below) and you’ll will see what I mean..