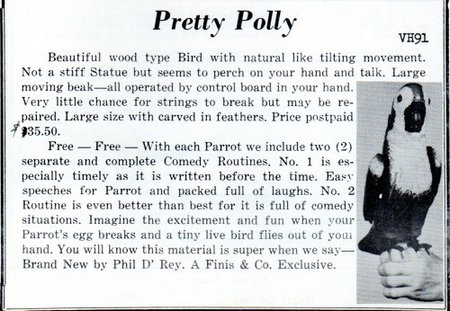 If you look at an old Finis Catalogue of ventriloquist figures he included a page of novelty items and today I am happy to share on of the rarest of those items the talking parrot . This creation by Finis is a premiere example because it is in near mint condition. The history of this bird is great too.

In the early days of my collecting I purchased this parrot and my very first Frank Marshall figure together. I purchased them from an antique dealer in Florida who did not know what they were. but I can say neither did I.

The Marshall was revealed to me as being a Frank Marshall by Dan Payes because I had sent it to him for repair. The mouth was not working and it was painted tar baby black. When I sent the tar baby to Dan he called me and said” Do you know what this is?” he then revealed to me I had purchased a Marshall Tommy Knots. It was only 20″ tall and the hands and feet were missing. I was so excited. I had my First Marshall. I still have it.

I decided to sell the parrot to recoup some money. I listed him on ebay and Albert Alfaro purchased him. Well the years have passed by and Albert told me he found the parrot packed in the attic of his house because of some work he was having done. He said I could purchase him back and I did. This is the only one I have ever seen except for the Vent Haven Museum. Also it is carved out of wood. A great job.

He has moving beak, moving head and his wings flap/ He also bends forward from the legs. You hold him in your hand and his feet wrap over your finger and hide the 3 control levers. This is a really neat figure. I hope you enjoy seeing him. 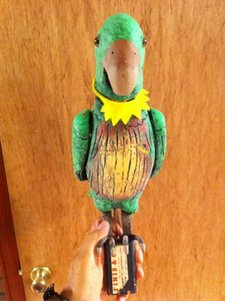